Officer gunned down in brazen attack 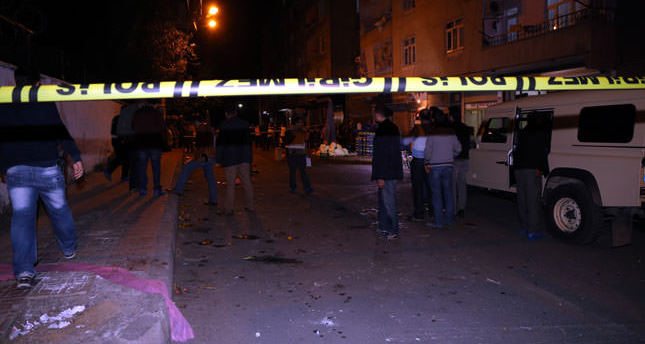 by Daily Sabah Oct 29, 2014 12:00 am
A noncommissioned officer was killed as he was out shopping with his wife in the southeastern Turkish province of Diyarbakır yesterday. The attack carried out by masked gunmen follows a similar assassination targeting three off-duty soldiers in the southeastern province of Hakkari last week.

Necdet Aydoğdu and his wife were browsing stalls at a marketplace in Diyarbakır's Bağlar district when two gunmen approached the couple and fired. Aydoğdu sustained a wound to his head and was hospitalized. He succumbed to his wounds at the hospital.

Turkish security forces rushed to the scene after the attack and launched a manhunt to capture the two gunmen.

Eyewitnesses claimed the gunmen had silencer on their guns.

Aydoğdu, off-duty at the time of the murder, was working at the 6th Main Jet Base Command located across the marketplace.

No one claimed responsibility for the attack in the district which is known as one of the strongholds of the supporters of terrorist organization PKK.

The Turkish Army announced yesterday that the Oct. 25 attack in Yüksekova which bears a similar pattern to yesterday's assassination was carried out by PKK militants.

Although the PKK pledged to cease its activities after the government launched the "reconciliation process" to end the conflict, the terrorist organization started attempts to stage a bloody comeback in the recent months. The terrorist organization is known for exploiting issues sensitive to the Kurdish community to fuel riots such as the plight of Kurds in Syria's Kobani.

The PKK has also hijacked 400 kilograms of explosives in Şırnak, another southeastern province, earlier this week. Authorities are concerned that it may target security forces with explosives in an apparent upgrade of its attacks from harassment fire on security forces to more violent acts. Senior PKK officials denied responsibility in the Yüksekova attack and other recent attacks in the region though they sporadically issue threats for taking to arms.