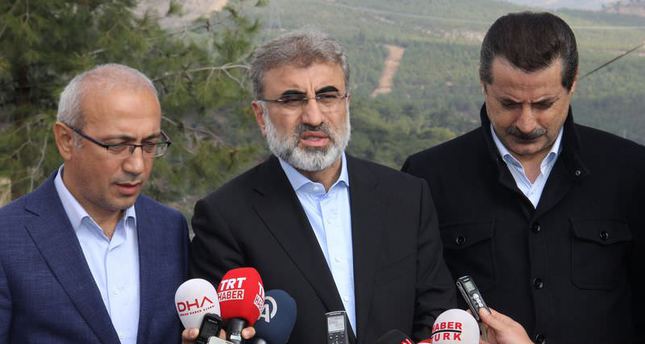 by Daily Sabah Oct 30, 2014 12:00 am
Turkey's Energy and Natural Resources Minister Taner Yıldız, Transportation Minister Lütfi Elvan and Labor Minister Faruk Çelik on Thursday have evaluated the current situation of rescue efforts for 18 miners who are trapped underground in Karaman and noted that hopes are diminishing.
Expressing that the water in the flooded mine was being discharged, Yıldız noted that collapses within the mine have taken place, which make it extremely difficult for the rescue team to conduct their job. "New obstacles appear with every meter we cross" said the energy minister, who expressed that the teams are working 24 hours nonstop and are prepared to see more collapses in the mine. He also noted that the discharge of water is a priority and equipment from Ankara, İstanbul and İzmir was being used for the rescue of miners.

Lütfi Elvan, the transportation minister also agreed with Yıldız's remarks and said the latest technologies were being used to discharge the water and mud that is still underground.

According to reports, the last inspection of the mine took place in June when the company received fines for eight safety negligence issues, followed by its shut down for three months as the company could not reopen it without addressing the safety issues. A law improving the working conditions of miners was passed by the government in September when the mining company closed the mine again due to operation costs. It was reopened in early October when the miners and the employers agreed to cut down operating costs by not providing lunch and transportation for the workers.