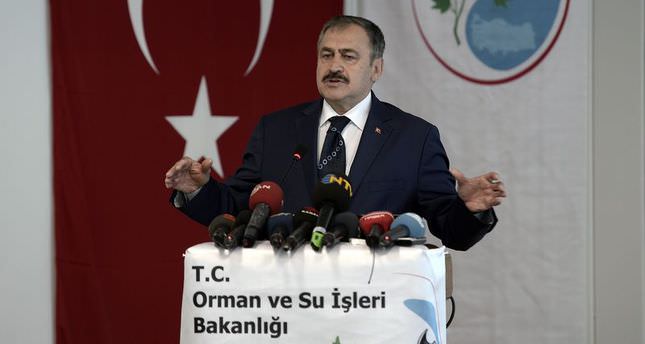 by AA Oct 30, 2014 12:00 am
Turkey's Minister of Forestry and Water said on Thursday that the country will receive enough seasonal rain this winter, allaying drought concerns.

Between September 2013 and February 2014, the reserves of the major dams of Istanbul, Ankara and İzmir dropped below 20 percent because of insufficient rainfall, significantly harming both agricultural and energy production. This left Turkish citizens, including Istanbulites, deeply concerned about their city's water supplies, despite the ministry's repeated guarantees of extra water sources.

"We are ready for any drought for the coming 50 years," Veysel Eroğlu told reporters in Istanbul on Thursday, acknowledging at the same time that "a decrease in the level of rainfall and snowfall across the country had reduced water levels in hydroelectric power plants and had created a decline in electricity production in dams in the early months of 2014."

"There is no need to concern over drought," added Eroğlu, noting that Turkey was no stranger to water scarcity, having experienced 12 years of shortages since 1971 and another six years of severe drought. "We made reforms in water storage and dam construction. We have founded more than 1,000 meteorology observation stations across the country and have planned every detail."

The reservoir is due to be completed in December 2016. In 2013, Istanbul's population was estimated at a bit over 14 million by Turkey's State Institute of Statistics.