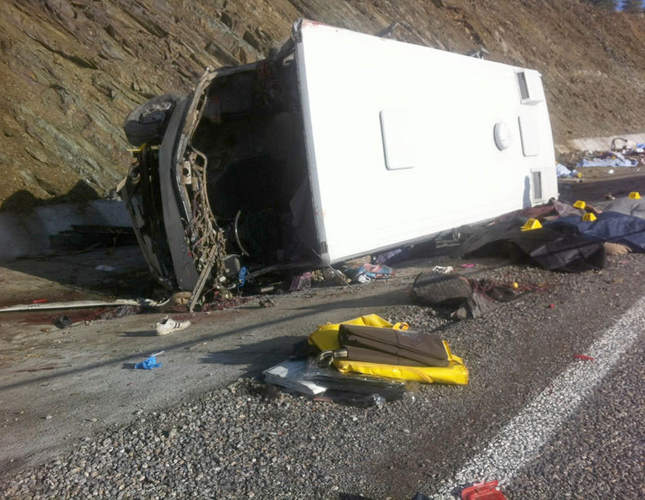 by Daily Sabah Oct 31, 2014 12:00 am
Turkey's poor traffic safety record is once again in the spotlight after 18 people were killed in a horrific crash in the western province of Isparta on Friday. The accident revealed multiple traffic safety violations including allowing passengers to travel standing up and a lack of vehicle maintenance before hitting the road.

Victims were apple pickers being shuttled to Gelendost, a district of Isparta, from Akşehir, a central Turkish province. At around 7:00 a.m., 45 laborers were crammed into a 22-passenger-capacity midibus that was traveling on a winding road when its brakes apparently failed. The vehicle crashed into a roadside retaining wall and overturned, leaving passengers scattered on the road.

Authorities said brake failure was likely caused by overloading due to a large number of passengers. Muammer Erol, governor of Konya, where the victims hailed from, visited survivors and spoke to reporters. Erol said the midibus company "deceived" gendarmerie forces who set up a traffic control checkpoint. "They initially traveled in two vehicles but after passing the checkpoint without any problem, they transferred all passengers to one midibus," he said, apparently to cut gasoline cost.

Fourteen people died at the scene while three others succumbed to their wounds at the hospitals to which they were taken, and 28 others were injured in the accident. The accident led to a two-hour closure of the road, as bodies were collected and the wreckage of the midibus was removed. Victims included the driver, a 15-year-old boy and 14 women working at apple orchards in Isparta. Those who survived the accident were mostly female laborers. They are all from impoverished families and work for about TL 40 ($18) per day.

Apart from the dramatic story of the victims, the accident highlighted how risky it is to travel by road in Turkey and how people often ignore traffic safety rules despite repeated warnings. The midibus, which was manufactured in 1999, was reportedly in a poor state and it apparently went without maintenance for much time – as the brake failure suggests – according to media reports. Authorities claim passenger vehicles are frequently inspected, but the latest accident proved otherwise. Obviously, traffic police did not stop the overcrowded midibus as it traveled from one province to another either.

The lack of inspections was also evident in another accident in the southern Turkish province of Antalya that killed 13 people after the bus driver fell asleep at the wheel. The Association of Health Institute, a nongovernmental organization, which compiles road accident statistics, issued a statement stating 2,709 people have been killed in accidents between January and September of 2014.

Although traffic accidents are seemingly on the decline from previous years, they still claimed 3,685 lives in 2013, according to statistics. As for 2014, the death toll may be higher. Along with the lack of inspections, reckless driving is the major cause of accidents, and both motorists and pedestrians often violate traffic rules. The government has undertaken a campaign against "the traffic monster," which at one point claimed more lives annually than natural disasters, terrorist attacks and crimes. Yet, despite stricter enforcement of traffic laws including harsher fines and sentences against those violating traffic rules, motorists keep ignoring them. From 2004 to 2013, over 6 million cars were impounded as part of not paying fines in Turkey where the number of vehicles is nearing 18 million.

Experts are calling for more frequent inspections of drivers and vehicles by security forces and the implementation of new regulations, particularly the enforcement of a rule regarding the use of seat belts in older vehicles that do not have backseat belts.