Miners’ ordeal persists on the fourth day of accident 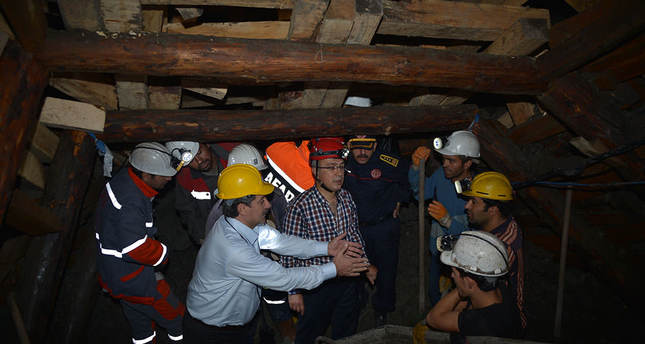 by Anadolu Agency Oct 31, 2014 12:00 am
Despite strenuous efforts since Tuesday, crews have not been able to reach 18 miners trapped in a flooded mine in central Turkey with depth and mud proving a challenge.

Eighteen miners remain trapped in the lignite coalmine in Ermenek, a small town in the central Turkish province of Karaman as of Friday. Rescue efforts continue around the clock as hope begins to fade on the prospect of locating the miners that were likely washed away by the tons of water that suddenly flooded the mine on Tuesday.

Hopes are waning as miners are believed to have been caught in floodwaters with nothing but oxygen masks with the sludge from the mine obstructing the draining of the water. Though all required equipment -- from state-of-the-art machinery used in syphoning out the water to drillers are deployed -- the collapse due to the flood pushes the sludge and pieces of waste in the way of search and rescue teams. Because of low visibility and the danger posed by waste, the sludge prevents divers from searching for miners some 300 meters underground.

On Friday, the state-run Mineral Research and Exploration General Directorate (MTA) dispatched a drilling machine to the site. The machine is expected to be an effective aid to draining efforts.

The Prime Ministry's Disaster and Emergency Management Authority (AFAD) coordinates the efforts involving a crew of 617 people. They both work in the evacuation of the water and clearing the way for the safety of search and rescue crews. AFAD officials said motor pumps used in draining out the water are gradually moving further underground as they clear the area.

Taner Yıldız, Minister of Energy and Natural Resources, is one of the three ministers overseeing efforts in the mine, regularly updating reporters about the developments. Those updates, nevertheless, often highlight the grim reality that the miners will likely not be reached in time for their survival. Although remaining optimistic to comfort the tearful families of miners, Yıldız acknowledged the difficulty of finding the men trapped below tons of water.

The minister said Friday the crews managed to reach a "significant point" in the mine, further facilitating the advance in the mine. But he was cautious: "We don't know what to expect if we advance."
Yıldız stated that their priority was removing obstacles rather than draining the water, although they were continuing evacuating the water. He said that the water level dropped below 800 meters. "We have to be more careful now, especially against a potential discharge of carbon monoxide after 780 meters," he said.

While people waited on good news about the miners, the cause of the accident is also a hotly debated issue.

Associate Professor Fetullah Arık, head of the Chamber of Geological Engineers in Konya, Karaman's neighboring province, was among scientists visiting the Ermenek mine after the accident. He joined other engineers investigating the possible cause of the accident. Speaking to the Anadolu Agency, Arık said he spoke to the relatives of the miners and found out that another flood happened two years ago, while the miners were not inside. "I learned that the flood entirely inundated the mine, but it was not reported as there were no casualties," he said.

"I observed cracks from the surface from below when I examined the geographical features of the area around the mine. This might be the source of the sudden outburst of water," he said.

Arık read the measurements in the wells near the mine and found no changes in underground water levels. "This indicates the water flowed from an old mine," he said, confirming earlier reports that the current mine site was built next to an abandoned mine without proper measures to ensure work safety.