One-third of Syrian women in Turkey suffer from loss 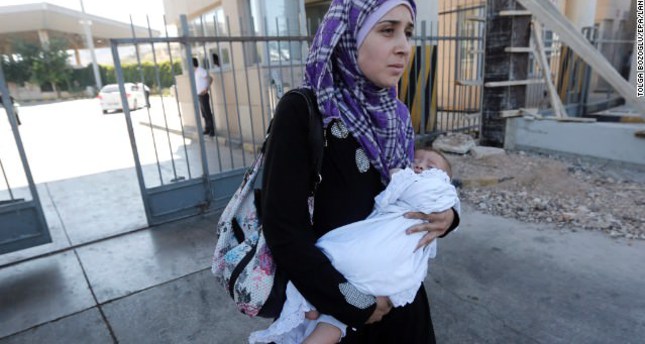 by Daily Sabah with AA Oct 31, 2014 12:00 am
A study conducted by Turkey's state-run Disaster and Emergency Management Authority (AFAD) has revealed that one out of three Syrian women taking refuge in Turkey has lost a relative to war.

Turkey began hosting thousands of war-torn Syrian refugees fleeing the violence of the civil war and has continued with the rise of the ISIS threat in their native land, and the rigors faced by Syrian refugees in the aftermath of their migration continue to come into the spotlight.

AFAD, which focused on female Syrian refugees while conducting its research, found that most of the women face psychological problems, as one out of three copes with losing a husband, child and/or other relative in the war. Syrian women who are trying to heal their wounds in Turkey – which they consider a safe haven – also have to contend with the hardships they face.

Trying to leave their pains behind, Syrian women are trying to carve out a life in camps setup by AFAD, which is also receiving assistance from various charities.

AFAD administered a questionnaire that surveyed 2,700 Syrian women, 1,500 of which reside in camps allocated for them. The remaining participants were located in various city centers. The study also recorded information about their socio-economic situation, sheltering, security, education and health conditions, and revealed that women constitute the majority of the Syrian population living in Turkey with more than half of them being between the ages of 19 and 54. The findings also show that these women do not have a job; therefore, they cannot make a living. However, the study also revealed that Syrian women taking shelter in Turkey prefer not to work.

The study found that 64 percent of the participants were illiterate and that they are worried about their future. They also think they should be provided with educational, curative and preventive programs for assuring a healthy mentality and an improved social environment. They told AFAD that most of their children suffer from sleeping disorders as well.

The research indicated that almost all of the women are content with the Turkish government for its welcoming approach towards them, and say they appreciate the government for all the step it has taken to facilitate better conditions for them.

"We are educating them in the Turkish tradition [about marriage]. We teach them that it is not legal to get married under the age of 18 in Turkey and there is a penalty for it," Islam told Anadolu Agency. Syrian women are receiving education in the camps about the dangers of early and multiple marriages, Islam said.

"We are working together with the United Nations Population Fund and the Prime Ministry's Disaster and Emergency Management on this subject and we are trying to expand our programs in this area," Islam added.

Islam's remarks came as an increasing number of female Syrian refugees are choosing to marry Turkish men as a second or third wife. "This does not fit with Turkey's hospitality. The responsibility for them is ours, for Turkish families and Turkish men."

"Around 1 million brochures in different languages about women's rights in Turkey are being handed out to raise awareness," Islam said.

Separately, Islam pointed out that Turks cannot adopt a Syrian child from Turkish refugee camps, as "it is not possible to adopt them. We [first] need an international agreement for this," Islam explained.

"We are taking unattended Syrian children under our protection after confirming that they do not actually have family. We have around 70 houses in Turkey where we host Syrian children. The number of these houses may increase in the near future," she added.

Another 100-person capacity foster home for children is being built in Gaziantep in southeast Turkey, the minister said. "We have the financial resources to build many more homes like that," she also added.

According to the Ankara-based Hacettepe University report, as of October 2014, Turkey was hosting over 1.5 million Syrian people – with 1.4 million of who live outside of official camps. Based on data from the country's Interior Ministry, 72 of the 81 Turkish provinces are currently home to Syrians who have fled their country.