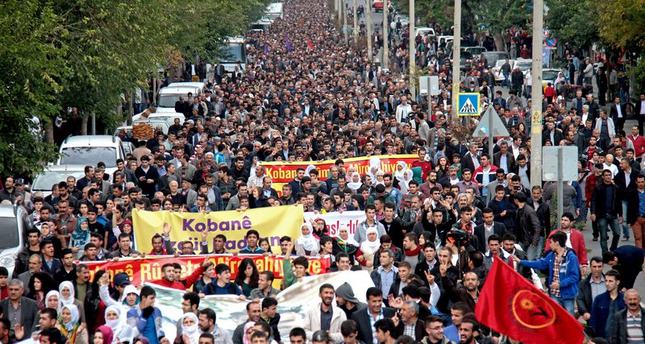 by daily sabah
Nov 01, 2014 12:00 am
The global demonstration to express support to Kobani – a Syrian town besieged by ISIS militants—that was set to be staged on Nov. 1 has been held peacefully amid fears that Turkey might face another of the violent street protests that claimed dozens of lives in early October.

The demonstration which has similar motives with the earlier protests that morphed into violent clashes, have ended without any troubles as feared. Turkish officials were worried that the global demonstrations would result in vandalism and aggressive acts of the protesters just like the previous protests but it did not happen.

The Peoples' Democratic Party (HDP) called for a second street protest as part of a global demonstration to be held on Nov. 1 after Turkey witnessed violent protests that morphed into deadly clashes and claimed dozens of lives in early October.