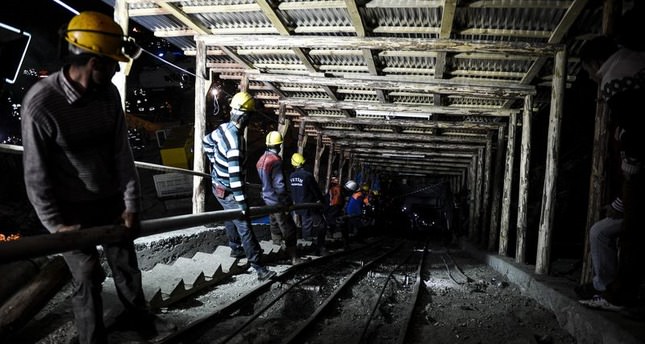 by AA
Nov 01, 2014 12:00 am
Rescue efforts have not yielded any results on the fifth day of a rescue operation to save 18 miners trapped in a flooded mine in Turkey's central Karaman province.

Water drainage efforts are currently ongoing, but claims in the media as to the recovery of three dead bodies from the mine are untrue, Turkey's Energy Minister, Taner Yildiz, said on Saturday.

"We do not know what we will face in an hour's time and water drainage is continuing," Yildiz told reporters in the Ermenek district, where the mine is located, 400 km south of the capital, Ankara.

The minister avoided giving an exact deadline as to when the teams would reach the miners.

"We have not reached any miners or any locations. We could face a new scenario at each level we drain the water," Yildiz added.

He urged press members to be sensitive in terms of accuracy, so as to avoid upsetting relatives of the trapped miners.

The minister continued that it would not be realistic to raise expectations and shatter citizens' hopes for the miners, whom the rescue teams have failed to reach five days into the operation.

"Relatives and co-workers of the trapped miners are still waiting in the vicinity of the mine for news from the teams," an Anadolu Agency correspondent reported from the scene.

Turkey's Minister of Transport, Maritime Affairs and Communications, Lutfi Elvan, and Minister of Labor and Social Security, Faruk Celik, also remained in the area to monitor the situation.

Earlier on Friday, Yildiz said the current priority was fortifying the mines in order to enhance workers' safety.