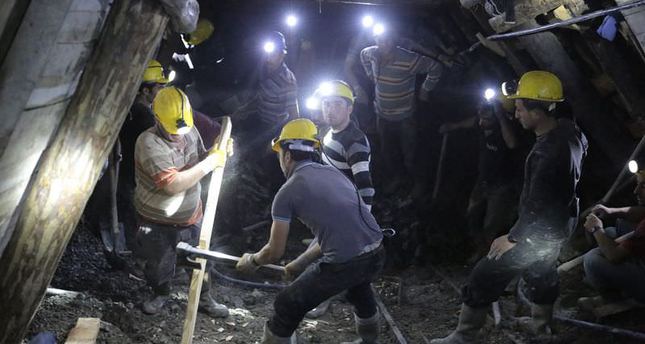 by daily sabah
Nov 02, 2014 12:00 am
Prime Minister Ahmet Davutoğlu on Saturday has announced that an exclusive hotline will be established by the Prime Ministry which will enable workers to express their concerns about their working conditions.

"Employers are obliged to provide employees with working conditions as outlined by the law" said Davutoğlu, urging workers to voice their concerns in the case that their rights are violated by employers. "Complain about them when you believe your rights are violated and are exploited" Davutoğlu noted, who touched upon the fact that employers seek loopholes to avoid fully implementing new laws and regulations which improve working conditions. Referring to the recent mining accident which took place in Ermenek district of Karaman, Davutoğlu stated that the new law reducing the working hours of miners from eight hours to six hours daily did not mean that employers could force their employees to have their lunch underground in the mine to supposedly save profits. "Such actions are a disgrace to human dignity" the prime minister, who expressed that the hotline will allow workers to inform authorities of such violations with the hopes to prevent and reduce the amount of future accidents in the workplace.

Two mining accidents took place last week alone and the rescue teams are still trying to reach 18 workers who are trapped underground in the mine in Karaman due to flooding. On Saturday, a mine located in Bartın province collapsed killing two Chinese workers. Other accidents in the workplace have led the government to seek stricter laws and regulations in efforts to improve working conditions.