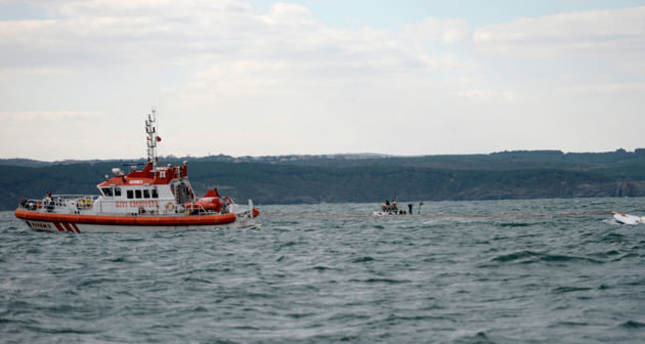 Rescuers save only seven of the 40 Afghan migrants, including women and children, who were reportedly traveling to Romania or Bulgaria, and recover 22 bodies. A criminal investigation is launched into the deaths

A boat, reportedly traveling to Romania or Bulgaria through the Bosporus, capsized some 5 kilometers off the coast of Rumelifeneri, on the northeastern tip of Istanbul's European side in the early hours of yesterday. Coast Guard crews rushed to the scene and managed to rescue seven migrants. They announced that 22 bodies were found at the scene and 15 were missing. The 12-meter long boat was carrying some 40 immigrants from Afghanistan – more passengers than its advised capacity, according to reports. Among those aboard were 12 children and seven women. Seven Coast Guard boats, helicopters and divers were dispatched to the scene to rescue the immigrants from drowning. Local fishermen also combed the area for survivors and bodies. The death toll may rise as the search efforts were continuing at the time the Daily Sabah went to press. Eyewitnesses said most of the casualties were children and strong winds complicated the rescue effort. Some eyewitnesses said all migrants were wearing life jackets but they saw three people clinging to one life jacket.

Istanbul's Chief Prosecutor's Office launched an investigation into the incident, however there is no word whether the immigrants were accompanied by smugglers trafficking illegal immigrants to Europe. It is unclear what caused the accident. It is likely that the boat, already overburdened with a large number of people capsized due to strong winds bearing down on the area.

The first photos from the scene show only the bow of the boat on the surface and the rest was submerged.

Earlier reports said the immigrants had set off from Bakırköy, a district of Istanbul south of the location where the boat capsized, although officials did not confirm from where they departed. Some reports also said Syrians were aboard the boat along with Afghans. Minister of Transportation, Maritime Affairs and Communications Lütfi Elvan told reporters that search and rescue crews found Afghan passports on nine migrants. He also said that the boat had three crewmembers.

A report on NTV said smugglers were paid 7,000 euros from each migrant aboard for travel to Romania.

Although cases of illegal immigrants drowning at sea while trying to reach European countries are frequent, the Bosporus, an entry to the Black Sea and the countries on its shores are rarely preferred by immigrants and smugglers.

Turkey is a popular route for many illegal immigrants from Middle Eastern and Asian countries, particularly Syrians, who have taken shelter in Turkey due to the ongoing civil war in their country, seeking a better life in Europe. Afghans also constitute a large part of illegal immigrant numbers, along with those from other Asian countries such as Myanmar.

They often travel by sea but traveling by land is also a popular choice for migrants. Those traveling by land either hide in trucks crossing into European countries from Turkey's northwestern border or attempt to cross the border on foot.

The Aegean Sea in the west is also preferred for Turkish coast's proximity to Greek islands, stepping stone for migrants looking to reach European shores. The Turkish authorities announced recently that the number of illegal immigrants captured while crossing the Aegean Sea to reach Europe has risen to over 7,500 in the first nine months of 2014, a significant growth compared to 6,937 immigrants captured in one year in 2013. Despite strict security measures, undocumented immigrants flock to Turkey's western coast onboard dinghies that often capsize in the rough sea.

Paying large sums to human traffickers, immigrants travel in crammed and shoddy boats to reach the other side of the Aegean Sea where Greece is located. However, they often end up drowning or rescued at the last minute, with few making it to Greece and only if the formidable Greek coast guard fails to apprehend them.