Search, hopes linger on seventh day of mine disaster 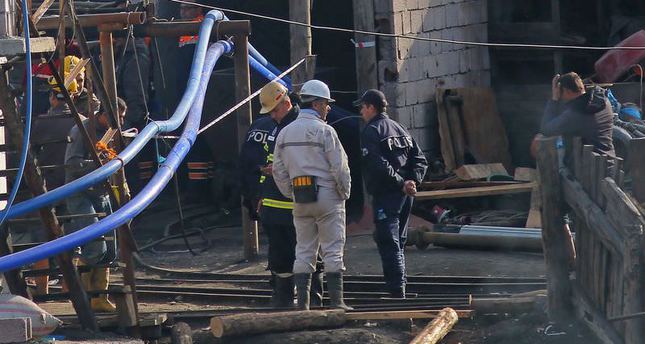 The lignite coal mine in Ermenek, a small town in the central Turkish province of Karaman, has been swarming with search and rescue crews and the distressed relatives of 18 miners trapped some 300 meters below the surface since Tuesday due to the mine flooding with water. Yet, on the seventh day of the disaster - the exact cause of which is still not known - no contact has been made with the trapped miners.

Security measures were stepped up yesterday around the mine triggering speculation that the miners were being recovered, but Energy and Natural Resources Minister Taner Yıldız, who is coordinating the efforts to retrieve the miners put an end to the rumors, saying that the measures were elevated upon the request of miners' families. Families have been desperately waiting at the entrance of the mine for good news from their relatives since the disaster broke out. Security forces sealed off the area to the entry for people not related to the miners on Sunday, and media crews were ordered to relocate to an area further away from the area where miners' families are waiting.

Several media outlets reported that nearly 20 coffins were brought to the hospital in the town on Saturday night amid security measures, further fuelling rumors that the miners likely could not survive the disaster.

Because of a photograph of coffins being taken to the hospital, Yıldız said they had to "take every possibility into consideration."

"Unfortunately, there is a strong possibility [that the miners may be dead]. We cannot ignore it. On the other hand, I find it wrong that the media published that photo," he said.

Yıldız assured reporters that they had nothing to hide from the media. "We share what we have with you, and we present you the facts," he told reporters. He also dismissed media reports that bodies of three miners had been recovered.

He said they avoided declaring how the next steps would progress. "Any presumption about how these efforts will conclude can turn out to be wrong," he said.

On the technical side of the search and rescue effort, Yıldız said crews managed to syphon out three fourth of the roughly 12,000 tons of water that had inundated the mine. "Very little was left inside, but it is difficult to further drain due to sludge blocking visibility. But we have an area of 300 meters where crews can advance to locate any miner that might be stranded there," he said. Yıldız explained that the water was no longer an obstacle for the crews but the accumulated mud inside made it difficult for them to advance deeper into the mine. He explained that they had to consider the safety of the crews as well while advancing to locate the miners.

Yıldız also said that an investigation into the cause of the disaster was underway and prosecutors investigated parts of the mine already drained of water.