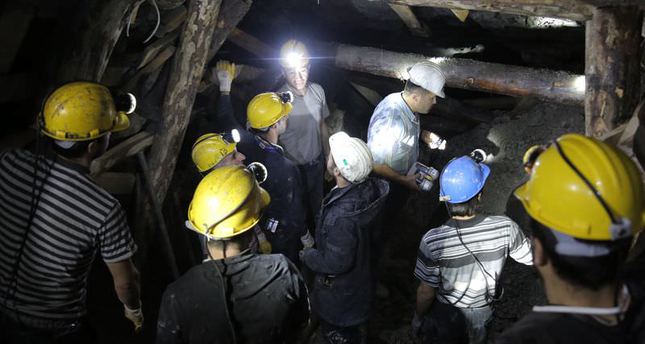 by AA
Nov 05, 2014 12:00 am
Rescue operations to save 18 workers who remain trapped in a flooded mine in central Turkey have not yet led to any tangible results, the Turkish energy minister said on Wednesday.

"We can access two-thirds of the flooded mine, which is 1,250-1,300 meters long. One-third of the mine is still closed," said Taner Yildiz on the ninth day of rescue operations.

There were 34 miners inside the mine when a water pipe exploded on October 28, causing flooding. The mine is located in central Turkey, about 400kms south of the capital, Ankara, in Karaman's Ermenek district.

"If we compare the mine to a well, there are 18 workers at the bottom of the well. They are not at the top of the well," he added.

Yildiz stated that the rescue operations is continuing with separate teams that consist of six shifts of 4-hours, and four shifts of 6-hours.

"We are looking for the 18 workers at the very bottom parts of the mine. We still have 1,300 meters to go. We have drained three-quarters of the mine," he said.

Yildiz stated that the rescue teams are trying to tackle each situation in the mine differently, since every case they encounter is "unique."

He added that they have passed over a barrier and seen damaged fortifications, which indicates that the roof collapsed.