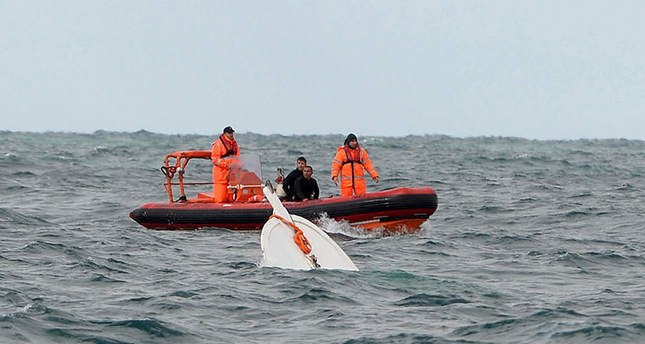 by AA Nov 05, 2014 12:00 am
Two people were detained for their alleged responsibility in the sinking of a ship that cost the lives of 24 illegal immigrants in Istanbul's Bosphorus Strait on Monday, judicial sources told The Anadolu Agency.

The suspects will be charged with "human trafficking," and "negligence," judicial sources said on Wednesday. The two people, whose nationalities were not disclosed, are expected to appear before the court on Wednesday.

A hunt for a third suspect is ongoing, security sources said. Meanwhile, a search is underway to find thirteen people who have been unaccounted for since the ship sank, the governor's office announced.

One hundred people participated in the search-and-rescue mission which was expanded throughout the coastal region, according to İsmail Gökkaya, an official from the Turkish Prime Ministry Disaster and Emergency Management Presidency.

The ship was reportedly en route to Romania, and was carrying around 40 people, when it capsized three miles offshore at the northern end of the 31-kilometer Bosphorus Strait. Six people were rescued. All are believed to hold Afghan passports.

Turkey is one of the main routes for immigrants and refugees seeking a better life in Europe.