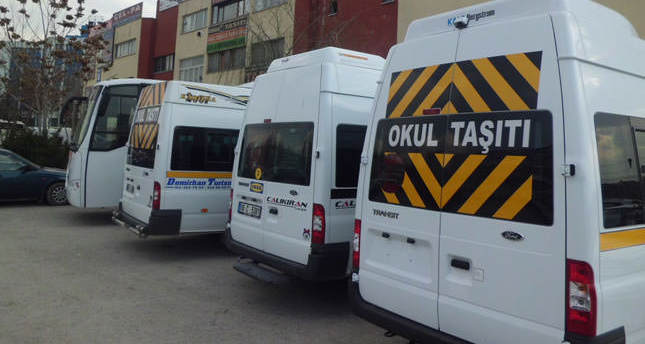 The government’s ambitious new program to boost the economy includes the removal of corporate shuttle buses and school buses, with plans to increase the number of bicycle lanes

The Turkish government's "transformation program" announced on Thursday will introduce major changes into many aspects of daily life in order to encourage economic growth. Prime Minister Ahmet Davutoğlu, flanked by his ministers, outlined the program at a press conference, but millions in big cities were especially interested in one landmark aspect of the program: the removal of shuttle buses, school buses and the introduction of more bicycle lanes.

The plan aims to contribute to growth indirectly by ending the lengthy traffic jams that are a major headache for those in cities like Istanbul and Ankara.

Corporate shuttle buses and school buses that make up most of the traffic, especially during rush hour, will be lifted if schools and companies that carry passengers are located near mass transit hubs and stations such as metro, metrobus and train lines. Students and company employees taking shuttle buses will either be given a free or cheap pass to be used in mass transit vehicles in return. Shuttle buses are considered among the major factors in traffic jams in Istanbul with nearly 50,000 shuttle buses operating every day to carry thousands to suburbs far from the central districts where many companies are located. Experts say shuttle buses operate only four hours daily and they are parked on the streets for the rest of the day, affecting traffic.

To further ease the traffic, the government plans to introduce fees for vehicles seeking access to central areas in big cities such as Taksim in Istanbul and Kızılay in Ankara. Roads leading to central districts will be converted into toll roads according to reports in the Turkish media. Istanbul already has a plan to ease inner city traffic to that extent with a "park and go" project. Cheap parking lots are built by the municipality near major transportation hubs that allow motorists to leave their car and take a tram, metrobus or metro. The project will be expanded to cover more transportation hubs. The construction of parking lots near mass transit vehicles operating on railroad will be compulsory with the new regulations. Parking lot fees will be integrated into train or metro passes to enable motorists to pay less while easing the traffic. Single-occupant cars are another reason for traffic snarls in Istanbul and other cities during rush hour.

The government also plans to encourage the distance and expansion of bicycle lanes across the country. New standards will be introduced for the design and construction of lanes, and parking lots for bicycles will be set up. Bicycle lanes will be located as far as possible from roads used by other vehicles. Buses and other mass transit vehicles will be modified to allow for the transportation of bicycles.

Speaking to Turkey's A Haber TV, Deputy Prime Minister Ali Babacan said pilot projects will be launched in several cities for the removal of shuttle buses and paid access to central districts. "It is a common practice in other countries and some municipalities in Turkey have requested its implementation here as well. In the end, this is an issue that should be handled separately for each city and the public should be consulted in regard to it. We can hold referenda. This will not be a compulsory application and will be decided on only after public approval. We envision a four-year term for its implementation, between 2014 and 2018," Babacan said.

As for the removal of school buses, Babacan said students' transportation to school in an easy and safe way would be provided, but corporate shuttle buses and shuttle buses for public sector personnel will be "definitely" lifted if employees reside in areas with easy access to metro or other rapid mass transit means.

"The state invested billions for metro lines to facilitate transportation; yet, shuttle buses still operate parallel to those lines. Certainly, shuttle buses, especially school buses will be exempt from this [ban] if they carry students and employees from neighborhoods located far away from metro lines," Babacan said. He said the ban on shuttle buses will be implemented after a meticulous examination of the locations that are being used so as not to affect people's means of transportation.