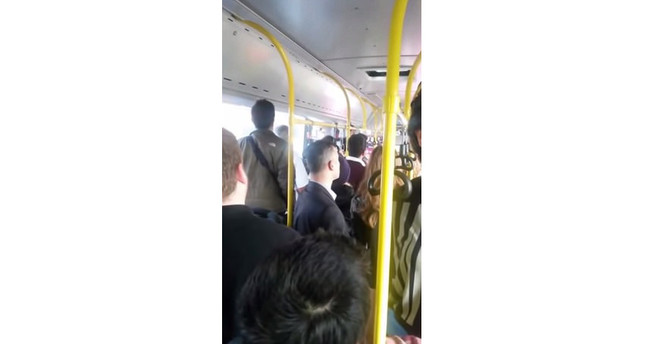 by daily sabah
Nov 11, 2014 12:00 am
The video of a woman threatening people who did not observe the one minute of silence for the Republic of Turkey's founder, Mustafa Kemal Atatürk, on the anniversary of his death, has prompted public ire over hate speech.

The woman, identified as "Gül Tan" on her Twitter account, uploaded the video on the social media website on November 10, the 76th anniversary of Atatürk's death. She was seen traveling on a packed bus, presumably in Istanbul. As the clock strikes 9:05 a.m., the time of Atatürk's death, the bus and cars on the street honk their horns signifying the beginning of the minute of silence, as is traditional for marking Atatürk's death. When some passengers in the crowded bus do not rise from their seats to observe the moment, Gül Tan shouts, "One day we will shoot those not observing the silence for the great leader Atatürk in the head." Some seated passengers are seen standing up but it is not known whether it was a reaction to the woman's remarks or simply a late observation of silence.

"Gül Tan" also shared on the site the fact that another woman, who is seen in the video, reacted against her capturing her on video without permission. "I argued with her and she had to shut up," she wrote.

Also on a tweet accompanying the video, Gül Tan wrote, "Atatürk is not dead, but you can encounter idiots who consider him dead. This will not be my last [demonstration]."

Her video went viral online and drew public ire, criticizing her of spreading hate speech. Some Twitter users, however, confronted her by publishing her workplace address.

A quick peek on her social media account reveals Gül Tan's previous tweets laced with hate speech. She praised a banner hanging on the door of Istanbul's Neve Şalom synagogue that reads, "This place should be demolished," tweeting, "This is the work of a conscious 16-year-old Turkish youth."

Mustafa Kemal Atatürk, who is credited with winning the independence of Turkey after World War I, is acknowledged as a national hero who pioneered efforts to help a crippled country recover from the war as the first president of the Republic. He is almost idolized by fringe groups, especially in secular sections of the society who deem even the act of not observing the minute of silence as "blasphemy." As President Recep Tayyip Erdoğan pointed out in his speech on the occasion of the November 10 anniversary on Monday, Atatürk was "exploited by certain groups to advance their ideologies." Indeed, especially conservative members of society were victims of a witch-hunt by the country's former secular elite who claimed wearing headscarves contradicted Atatürk's vision of a modern Turkey.