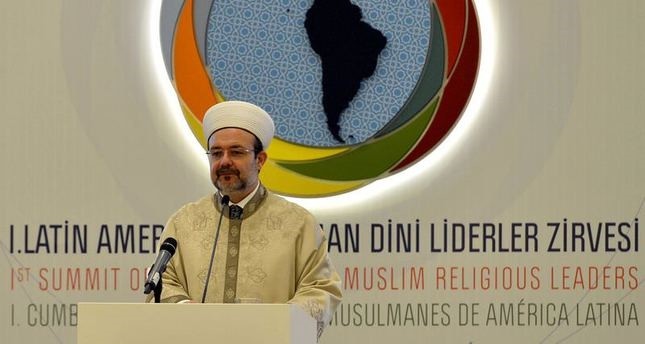 The summit opened with a recitation from the Holy Quran. As the hosting leader, President of Religious Affairs, Professor Mehmet Görmez, began his opening speech with remarks on the current global problems Muslim communities face as a community.

Görmez added that Muslims around the globe are currently experiencing difficult times, be it as oppressed minorities, victims of internal conflicts, or sufferers of the global economic issues.

This summit is not hosted to impose any ideology, or shift the current conflicts in Muslim regions to other lands, but rather to initiate a dialogue to discuss the opportunities for cooperation, and relationship building in religious, historical and cultural areas, as well as sharing experiences in religious education and services, President, Mehmet Görmez, added.

Speaking at the opening ceremony, President Mehmet Görmez said they were late to reach out to Muslims in Latin America, "as we were so entangled in problems of our own region." "Today, we gathered to rebuild the brotherhood we have long neglected and exchange views with brothers we have not heard from for decades," he said.

"We stand ashamed for not reaching out to these Muslims who were displaced from al-Andalus by the [Spanish] Inquisition," Görmez said. He added that they were also ashamed that they did not help the Muslim slaves transported to Latin America from Africa during the colonial era. "The Islamic world also turned its back on Muslim communities who emigrated to Latin American countries from Ottoman territories and were subject to assimilation on that continent," he said.

Görmez also related the story of Abdurrahman Efendi, an imam aboard an Ottoman warship that traveled to Brazil in 1865. Abdurrahman Efendi was among the Ottomans whose ships got lost in a storm while traveling to the Persian Gulf and ended up on the Brazilian coast. He stayed in the country for six years to help Muslims there and teach Islam in the region. "He preached for years and taught the real Islam to Muslims there who had forgotten the religion due to assimilation policies," Görmez said.

Five religious organizations, including the Eurasian Islam Council, the African Religious Leaders Summit, the Meeting of European Muslims, the Balkans Meeting of Religious Directorate Leaders and the World Islam Scholars' Peace, Moderation and Foresight Initiative, are among the organizations attending the summit.