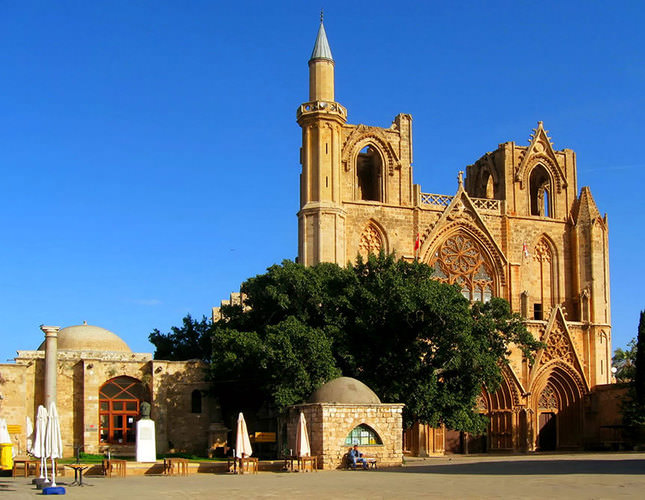 by AA
Nov 14, 2014 12:00 am
Saturday marks the 31st anniversary of the Turkish Republic of Northern Cyprus - a small Mediterranean country, forged in conflict, but which is still only recognized by Turkey. For people from this small nation, life as a citizen of an unrecognized state can be difficult.

Cyprus was divided by inter-communal violence which erupted amid a 1974 Greek Cypriot attempt to annex Cyprus to Greece ruled by a right-wing military junta.

The island has been divided since Turkey's intervention - "Operation Atilla" as the Greeks would call it - in 1974.
Although Southern Cyprus is recognized internationally and is a member of the EU, the TRNC is only recognized by Turkey.

As Turkish Cyprus is not recognized, its citizens can only trade or communicate internationally via Turkey. They are also not allowed in any international cultural or sports events.

She owes her fame to her inter-communal background, as one of her first hits was a cover of a Greek song. She sings both in Greek and Turkish.

"It has been 31 years since the TRNC was founded. Many things have changed around the world since that time but the Cyprus conflict hasn't been solved," she says.

"TRNC citizens have suffered as a result of this conflict," she adds.
Although living in Istanbul for many years has preserved Sali from negative effects of being a citizen of a unrecognized country she says: "My family members and my relatives are affected by the situation.

"Fortunately there is our assurance, the motherland: Turkey," she adds.

Inter-communal violence, economic struggles or just getting higher education are some of the reasons why Turkish Cypriots had to flee their country over the years.

Sali also holds a British passport; over 130,000 Turkish Cypriots - a third of the TRNC's current population - live in the U.K., according to Turkey's consulate in London.

The U.K. governed the island for more than 80 years until the foundation of the Cyprus Republic, a Turkish and Greek inter-communal country, in 1961.

Gulboy thinks that the presence of the TRNC has a special meaning because it is the only country Turkish Cypriots can call their own.

"TRNC citizens have a sensitive nationalist feeling as a result of living outside of their own country," he says referring to Turkish Cypriot diaspora.

He also points out that Turkish Cypriots' have their own culture and language as the community speaks a slightly different Turkish dialect.

Gulboy says his family is "nationalist" and unlike most TRNC citizens, chose not to have a Southern Cyprus passport, which would allow them to travel visa-free to EU countries.

Another Turkish Cypriot Istanbul resident is 70-year-old Zehra Bilge Eray, the head of the local branch of the Ankara-based Cyprus Turks Cultural Association.

She was born in Lefkoşa and came to Istanbul to study architecture at Istanbul Technical University in 1965. Since then she has been living between Istanbul and Cyprus.

Eray says: "Most Cypriots used to come to Turkey to get higher education. Today the TRNC has around eight universities with a connection to global educational institutions.

"We broke the embargo by education and culture," she adds.

According to Eray the number of Turkish Cypriot students in Turkey has declined over the years after the opening of new universities on the island, such as a branch Turkey's elite Middle East Technical University.

Although ongoing talks between Turkey and Greek Cypriots stalled on Oct. 7 after Turkey sent a ship to monitor an oil-and-gas exploration mission off the Cyprus coast, Turkish Cypriots are still hopeful for a two-community solution to the island's conflict.

"The two communities have been living peacefully during an era that was deadlocked for the last 31 years," says Ziynet Sali.