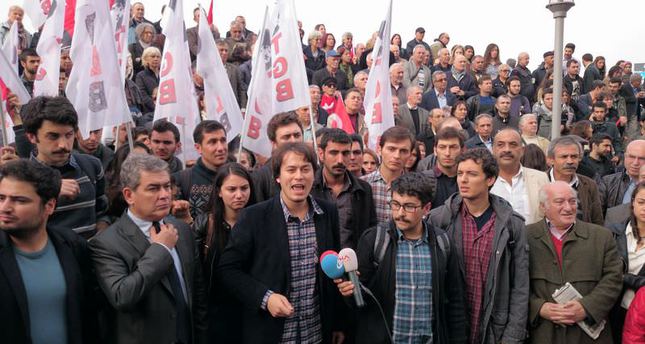 by Daily Sabah Nov 16, 2014 12:00 am
The All Youth Union (TGB), a radical group behind the attack on three U.S. Navy sailors in Istanbul last Wednesday, warned U.S. Vice President Joe Biden, who is scheduled to visit the city on Nov. 21, that they would "stand against" him.

A total of 12 supporters were detained after the incident that involved assailants throwing red paint at and placing sacks over the heads of three sailors.

Members of the group held a press conference yesterday in Istanbul, and TGB president Çağdaş Cengiz told reporters that they were "glad" that their action "received wide coverage in world media."

Cengiz said their attack on the sailors who were on shore leave from a U.S. Navy ship anchored on the Istanbul coast did not seek "to tarnish their dignity." On the contrary, "it targeted U.S. policies, not the people of the United States." Referring to their description as "thugs" by a Pentagon spokesman, Cengiz said, "We would only be honored by it. Thugs [was a term] used to define revolutionaries in Turkey."

He continued, and said, "The people of the United States are our brothers and sisters like people of other countries. However, their state brings destruction, terrorism and war to the world. We aim to end U.S. hegemony," he said.

Cengiz also said they were "ready for Joe Biden." "I would like to tell Biden that he should remember that Turkish youth will stand against him when he arrives here," he said, although he did not elaborate on what kind of action they would carry out against the vice president and whether it would involve sacks or red paint.

The TGB is a fringe group known for their "sack" attacks against foreign soldiers in reference to an incident in Iraq in 2003 when U.S. troops detained Turkish troops and escorted them outside the compound they were using in Sulaymaniyah while forcing them to wear hoods.

The ultranationalist group linked to the opposition Labor Party (İP) rose to prominence during the 2013 Gezi Park protests. Along with other radical factions, the TGB turned the pro-environment protest into a riot targeting police, public properties and Kurdish groups.