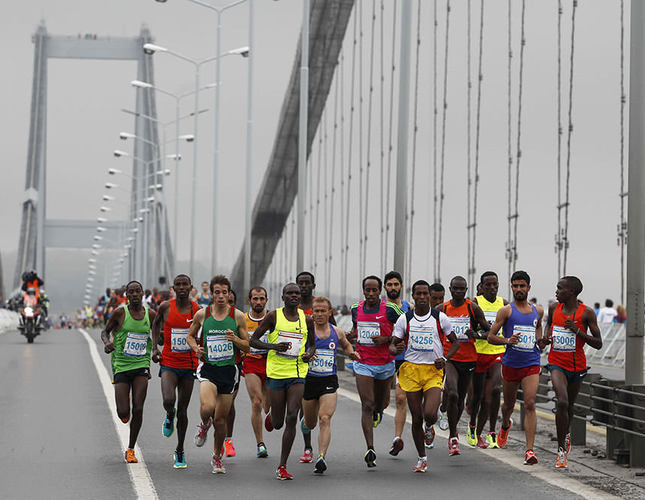 Tens of thousands of Istanbulites and athletes from around the world participated in the world's only intercontinental marathon on Sunday morning, which crossed the Bosporus Strait from the Asian to the European side. Nearly 25,000 athletes, including Olympic medal-winners, took part in the 36th 42-kilometer Vodafone Istanbul Marathon, as well as two other 15-kilometer and 10-kilometer races. The marathon started on the Asian edge of the Bosporus Bridge and ended in the historical peninsula of the Sultanahmet district, where the Blue Mosque and Hagia Sophia are located.

Istanbul Mayor Kadir Topbaş was at the start of the marathon and was joined by Youth and Sports Minister Akif Çağatay Kılıç and former Kenyan marathon world record-holder Paul Tergat. Close to $1 million will be awarded to leading athletes from 118 countries.

In 2013, French athlete Abraham Kiprotich secured first place while Siraj Gena from Ethiopia and Evans Kiplagat from Kenya followed him respectively. Last year's women's marathon was won by Kenyan Rebecca Kangogo Chesire who was trailed by two Turkish athletes, Elvan Abeylegesse and Sultan Haydar. This year, Ethiopia's Bazu Worku ran for his third 2014 marathon win. Around 150,000 Istanbulites from all ages, occupations and neighborhoods also left their warm houses to go for an 8-kilometer public fun run, creating an open-air festival in chilly weather.

Organized by the Istanbul Metropolitan Municipality and sponsored by Vodafone, Adidas and NTV Spor, the 36th Vodafone Istanbul Marathon had three categories: A full marathon of 42.195 kilometers, one 15-kilometer and another 10-kilometer race. There was also a Fun Walk (8 kilometers) for those supporting the cause.

The 36th Vodafone Istanbul Marathon had some new surprises this year. It was a "green marathon," as the consumption of eco-friendly products was particularly encouraged.

The 36th Vodafone Istanbul Marathon has become one of the top 22 marathons in the world and one of the top 11 marathons in Europe. For the third time this year, the International Association of Athletics Federations (IAAF) has put it in the "Gold Label" category.

The marathon sees an increasing number of participants every year. This year, a total of 25,000 athletes from 118 countries ran on Sunday. Last year, only 98 countries participated. This year's guest of honor was Paul Tergat, a professional long-distance runner from Kenya. Tergat held the world record in the marathon from 2003 to 2007, with a time of 2:04:55, and is regarded as one of the most accomplished long-distance runners of all time. Tergat is also known for being a gentleman within the athletic community.

A total of $803,000 will be awarded to marathon winners including $50,000 to first place winners for women and men, $25,000 to second place winners and $15,000 to third place winners, while $20,000 has been allocated to the first three wheelchair participants that finish. Through the Istanbul Marathon, Vodafone Turkey will also be collecting donations on behalf of the Dream Academy, which is connected with the Vodafone Turkey Foundation to integrate disabled people into society through art and sports.

According to the Vodafone Istanbul Marathon website, "In the beginning, the main intention was simply to organize a marathon event. Being a unique city in terms of history and geography, Istanbul deserved a unique marathon. Despite the financial and logistical problems, an initial project was set up for the Eurasia Marathon. In 1978, officials were informed that a group of German tourists, who ran marathons in countries they visited, would visit Istanbul the next year. It was then we decided to create the Eurasia Marathon project. Having solved problems with the course and traffic, the organizers invited well-known Turkish athletes to the event as well. Finally, all preparations were completed and the marathoners – of whom 34 were from the 74-person tourist group – gathered at the starting point, 700 meters behind the Bosporus Bridge on that historical day. Thus, the Bosporus Bridge witnessed a marathon for the first time in its history, which the runners crossed from Asia to Europe. That was the beginning of an important event. The first Eurasia Marathon was won by Hasan Saylan, a Turkish athlete from the city of Zonguldak, with a time of 2:35:39. One of the most important features of the Eurasia Marathon is that it has aimed for friendship and peace since day one. Well-known athletes such as Ian Thompson and Terry Mitchell participated in the Eurasia Marathon, which also became a testing ground for Turkish athletes, many of whom went on to run in international races."