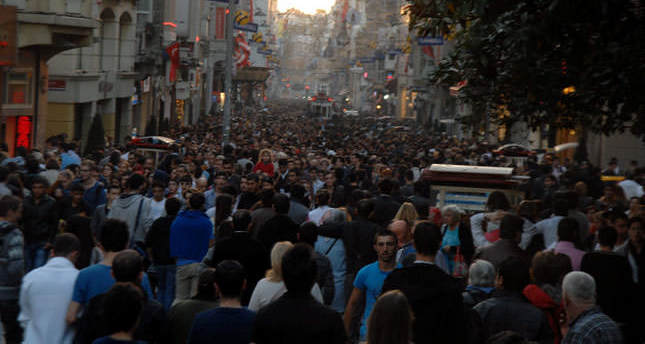 A study on Turkish society reveals a new class emerging: modernists who unconsciously oppose everything and whose hostility focuses on conservatives whose education levels are rising

A new study by Ipsos, a private research company, shows a rise in the educational level of conservative members of society and an emergence of a modern class with reactionary tendencies. One of the most striking results of the study is the emergence of reactionary moderns that have apparently gained momentum with the rise of new conservatives, the main group they oppose. "They oppose both good things and bad things. Their reaction is unconscious and does not make sense. They are not pleased with political and economic progress," Kıvanç Bilgeman, an official from Ipsos, says. The "Guide to Understanding Turkey" was composed of interviews conducted with 15,854 people from 34 provinces in the country. The study classifies society into groups entitled as new conservatives, traditional middle class, indifferent, conventional nationalists and reactionary moderns.

New conservatives make up 35 percent of the total population and, although their number does not have an increasing trend, they are "coming out of their shell," according to Bilgeman, especially within the past 11 years, after the ruling Justice and Development Party (AK Party) came to power. As for the indifferent, who Bilgeman calls "members of society tired of everything," their number has slightly increased in the past two years.

The new conservatives the study refers to is a part of society that had suffered from discrimination for decades. Oppressed by the secular elite that curbed their rise in all walks of life by blacklisting them, imposing a ban on the headscarf for conservative women in the public sector and universities, conservatives made a comeback with the AK Party's victory a decade ago. Embracing minorities, Kurds and others who suffered from discrimination at the hands of the state, the government also restored the rights of conservatives, most notably by lifting the ban on the headscarf.

The study shows new conservatives who increasingly participate in higher education, are more social and sensitive about a number of issues. "They are dangerous for reactionary moderns. Those moderns see them as the new rulers of Turkey," Bilgeman says.

Interviewees from this group were asked about freedom of expression and democracy in Turkey. "We thought they would be more supportive of these but found out they oppose, for example to Kurdish-language education and allowing the headscarf in the public sector. They are not pleased that the Turkish army lost its power [or rather its tutelage in politics]," he says. "They think everything in Turkey is awful," he sums up. "Reactionary moderns" are concentrated in the Marmara, Aegean and Mediterreanean regions according to the study where the opposition parties draw strong support. Looking into their education level, the study found only 22 percent of them were university graduates. And they are likely here to stay as the study projected that their number will not drop in the near future.

Bilgeman says that, according to the study, new conservatives make up 35 percent of society. This is followed by the traditional middle-class with 20 percent, the indifferent with 19 percent, conventional nationalists with 14 percent and reactionary moderns with 12 percent.

He states that the new conservatives classified in the study are not "ultraconservative." "They are open-minded and interested in worldly matters," Bilgeman says. Though their political stance is not questioned in the study, Bilgeman believes many of them are supporters of the AK Party. "Most of the interviewees were women in terms of conservatives. They are more active on social media and in environmental issues. Their educational level is high," he says, adding that majority of conservatives are concentrated in the Marmara region where Istanbul is located and central Turkey, a stronghold for conservatives. "They are the most optimistic group in society with regard to politics and economy and have a higher confidence in politics, state and the army. They support democratic opening (a series of reforms by the government especially the reconciliation process aiming to end the Kurdish question)," he said. Further on this group, Bilgeman says their religious sensitivity is higher while they endorse more participation from women in the workforce unlike the ultraconservative members of the society. "In the end, they came out of their shell. They have long remained shy of socializing since a government close to them was not in power. The AK Party's victory brought them out," he says.

Opponents of the AK Party have long criticized its supporters as "a lowly-educated group eating macaroni" in reference to food aid the government supplied to impoverished families. "This is entirely untrue. Both their education and income have risen. Soon, they will be trend setters. That is why reactionary moderns dislike them and view them as dangerous," Bilgeman says.

Though branded as reactionary moderns, interviewees in the study likely point to a new group called "ulusalcı" in Turkish, which is roughly translated as "nationalist." Yet, they differ from conventional nationalist groups by aligning themselves more with left-wing ideologies. Still, the "ulusalcı" group, which strictly shuns any religious affiliation, finds supporters among some nationalists who once classified themselves as "ülkücü" or idealist and defended a Turkish nationalism with strong Islamic undertones.