Funeral ceremony held for eight miners retrieved from flooded mine 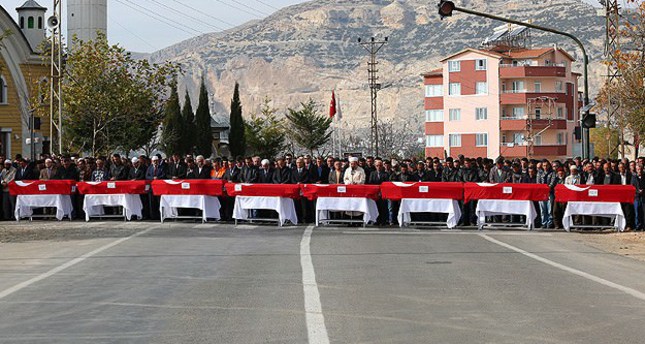 Funeral prayers were held for eight miners whose bodies were recovered from a flooded mine in central Turkey earlier this week.

Mehmet Görmez, head of Turkey's Presidency of Religious Affairs (DİB), led the funeral prayers for the miners who had been trapped in the mine since October 28. The minister for Transportation and Telecommunications, Lütfi Elvan, who was among the ministers overseeing the search and rescue efforts at the mine, also attended the funeral prayers.


The wailing of wives, parents and children of the deceased miners echoed in the courtyard of the mosque where prayers were held.

Bodies were then sent to their hometowns for burial. Osman Çoksöyler, Hüsnü Çolak and Bahri Üzer were buried next to Kerim Haznedar and İsa Gözbaşı, who were the first victims retrieved from the mine on the 11th day of the rescue efforts. Hunching on the coffin of her husband, Yaşar Çoksöyler vowed to pursue her legal battle against his "killers," referring to the mining company officials who were arrested on charges of negligence of work safety for the flooding of the mine.