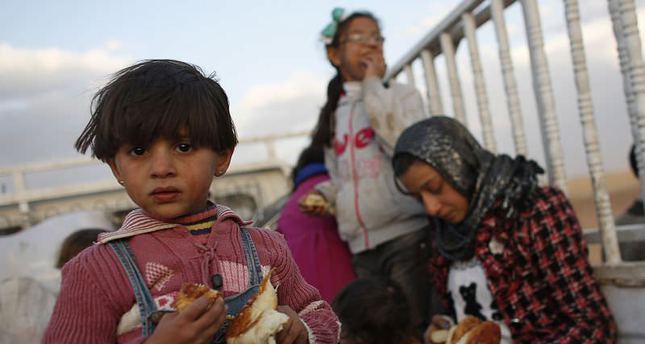 Amnesty International praised Turkey’s mobilization to help displaced Syrians in a new report released yesterday, but raised concerns that with a growth in their numbers, Syrians in Turkey could face a grim future

A new report by Amnesty International has commended Turkey's response to the Syrian refugee crisis but voiced concerns that the growing number of displaced Syrians fleeing into the country could leave Turkey shorthanded in addressing the crisis.

Andrew Gardner, Amnesty International's researcher on Turkey, said in a statement that Turkey was now struggling to meet even the most basic needs of hundreds of thousands of Syrian refugees and this resulted in many leading "a life of destitution." Gardner said the humanitarian assistance from the international community for Syrians in Turkey has been "pitifully low" and called upon Turkey to step up efforts to drum up international support for Syrians.

The country, which has a population of 76 million people, hosts about 1.6 million Syrians with only 220,000 of them living in well-equipped tent camps and facilities. Although the country plans to open more tent camps for the displaced, experts warn that they may still prove insufficient in the face of a threat of a new influx from Syria. Earlier this week, Foreign Minister Mevlüt Çavuşoğlu said that 2 million people or more may seek shelter if rebel-held Aleppo, the second largest city in Syria, falls into the hands of the Syrian regime forces or the self-proclaimed Islamic State of Iraq and al-Sham (ISIS).

Andrew Gardner said that Turkey was burdened with the crisis on its own. "The reluctance of wealthy countries to take greater financial responsibility for the refugee crisis as a whole and the paltry offers of resettlement are deplorable," he said.

Turkey has repeatedly called on the international community to help it to cope with the influx of Syrians displaced by the four-year-old civil war. The country spent $4 billion on accommodation for Syrians and other needs, while donor countries have pledged aid to Turkey via the U.N., which earmarked $497 million for Turkey, only $160 million of which has been spent so far.

In the face of the growing number of displaced Syrians seeking shelter, Turkey has been pushing for a no-fly zone for refugees inside Syria near the Turkish border. But the U.S., which leads the coalition forces carrying out air strikes against ISIS in Syria, has voiced reservations over the establishment of the zone.

The Amnesty report said that only 15 percent of Syrian refugees outside the camps receive assistance from humanitarian agencies and organizations. It notes that desperate Syrians had to fend for themselves to make ends meet. Andrew Gardner says they faced a grim and hopeless reality. "They have been abandoned by the international community. The world's wealthiest nations are dragging their feet when it comes to offering financial support and resettlement," he said.

The report notes that Turkey clarified the legal status, rights and entitlements of Syrians in October in a temporary protection directive adopted by Parliament and calls for its full implementation.

Turkey has had an open-door policy for Syrians since March 2011. They are hosted under temporary protection regulations including unlimited stay, protection against being forced to return and free access to healthcare. The government also announced that they will be issued temporary work permits.

The report by Amnesty says Turkish border forces turn away Syrians without passports if they are not in urgent medical or humanitarian need. It further claims 17 people have been killed by troops on the border between December 2013 and August 2014, although it does not clarify whether those were people involved in smuggling, a rising phenomenon in the face of the civil war that left the Turkish-Syrian border porous.