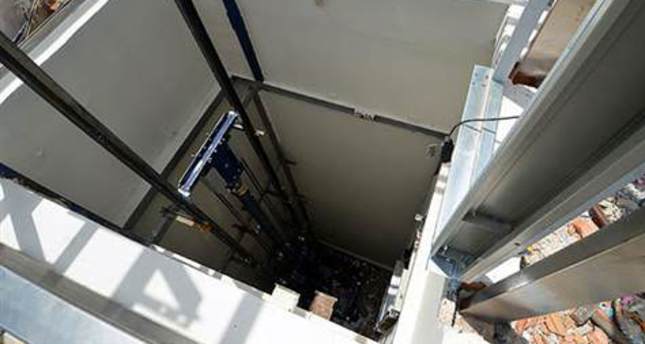 by daily sabah
Nov 20, 2014 12:00 am
A man died in Istanbul on Thursday in the fourth elevator accident to have happened in Turkey in two weeks. 43 year-old Abdullah Üye died after he fell from the ninth floor down the elevator shaft of a building in Istanbul, where he was working as a construction worker.

The latest elevator accident comes after another worker died and three others were injured on Wednesday as they crashed to the ground from the ninth floor of a building in Ankara.

In that incident, the bottom platform of an elevator being used in a 17-floor tall building under construction broke off, causing the workers to fall to the concrete ground from the ninth floor.

Previously, seven students were injured after an elevator crashed to the ground at a school located in Sakarya province's Geyve district on Tuesday.

The accident took place when the elevator in Geyve İmam-hatip school fell from the third floor. The seven students present in the elevator at the time were immediately rushed to a nearby hospital, after the rescue teams had reached the scene.
Similarly nine people were injured after an elevator at a state hospital crashed to the ground in Adana province last week. The elevator, which was in a hospital located in Adana's Seyhan district, fell from the second floor. The nine people who were injured in the accident received treatment at the same hospital.