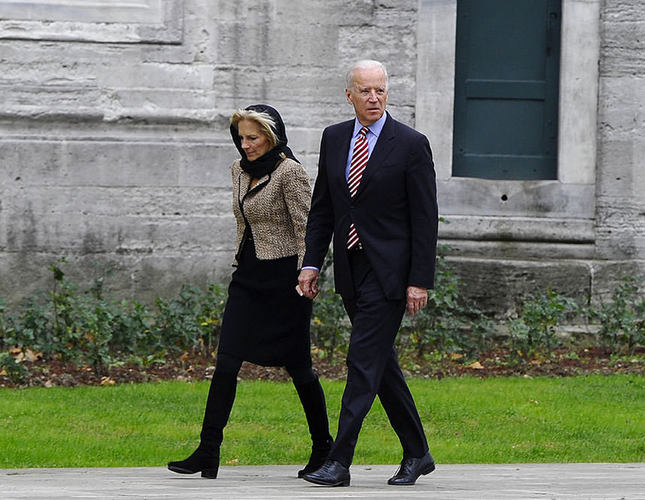 by daily sabah
Nov 26, 2014 12:00 am
U.S. Vice President Joe Biden, who has been criticized by some U.S. media outlets for expensive hotel bills, apparently managed to win his critics over by saving a few pennies for government coffers during his visit to Istanbul.

Biden was in Turkey last weekend on a visit – he had stirred up a storm in the country, coming under fire for not apologizing for remarks critical of the Turkish administration for its alleged inaction against the Islamic State of Iraq and al-Sham (ISIS).

Media outlets such as the Weekly Standard were more interested in Biden's stay in a posh hotel overlooking the Bosporus than his remarks on Turkey or content of the trip. The Weekly Standard, which describes itself as "a weekly conservative magazine" took issue with Biden and his entourage's hotel bill in an article on its website. The article, quoting an official posting of the hotel contract on a federal website, showed that Biden and his accompanying delegation reserved 200 rooms and one large conference room at the Hilton Istanbul Bosphorus for an estimated cost of $624,734.

Prices exclusive for visiting foreign state officials on the hotel's website start from TL 495 ($222) for a simple twin guest room and the highest rate is TL 1,445 for a deluxe suite overlooking the Bosporus if the room is booked two weeks in advance.

The piece published on the Weekly Standard said five hotels were contacted to supply 200 rooms on short notice, but none were able to meet the requirements and two other hotels were deemed "too far away" from the locations of the events in Istanbul that Biden would attend. Biden's choices, determined in line with location and "security" requirements, dropped to one hotel, but officials in charge of booking the rooms discovered it is undergoing "an ongoing renovation." Finally, Biden's staff settled on the Hilton Istanbul Bosphorus, which offered "a fair and reasonable" single room rate of $299. It is likely that Biden's staff stayed in "family rooms" as their rate for visiting state officials is TL 675. It is not known whether the vice president himself preferred the rooms overlooking the Bosporus rather than the street or if he stayed in an extravagant suite with a view of the famous strait.

Biden was at the center of another debate in 2013 for paying $585,000 for a one-night stay at a Paris hotel with his entourage. Officials in charge of organizing the vice president's travel defended the cost, explaining that it was quite normal as it included accommodation for the entire staff ranging from Secret Service agents to communications and other support experts.