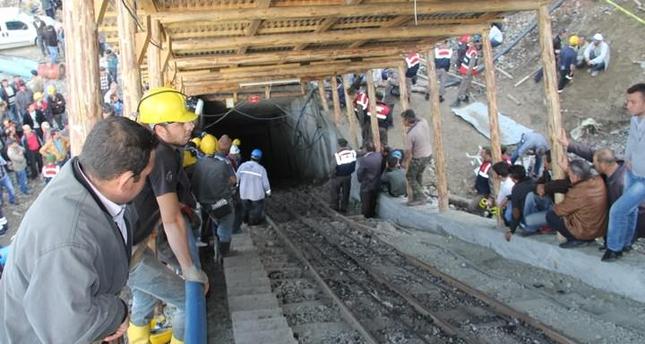 by daily sabah
Nov 26, 2014 12:00 am
A Turkish court yesterday turned down the first indictment for suspects in last May's mine disaster in western Turkey's Soma, citing "shortcomings."

The Heavy Penalty Court in Akhisar, a district of the western Turkish province Manisa where Soma is located, returned the indictment to the prosecutor's office due to four basic insufficiencies regarding the investigation into the death of 301 miners. These shortcomings included a failure to have all victims of the incident testify, a violation of the individual criminal responsibility principle, a miscalculation of charges for suspects and missing evidence. The court also pointed out that the indictment was concluded before the country's top scientific body TÜBITAK completed a report on the sensors in the mine.

The prosecutor's office is obliged to present a new indictment to the court after addressing the mentioned shortcomings.

The disaster that led to the death of miners due to carbon monoxide poisoning after a fire broke out, was attributed to officials of the private company running the coal mine who were accused of neglecting work safety.

The indictment prepared following the incident on May 13 describes 301 miners as victims and 214 people including the families of the victims as complainants. It includes 161 survivors as complainants and victims and asks the court to hand down sentences to 45 suspects including eight in detention on charges of involuntary manslaughter.

The prosecutor is pursuing life sentences for eight high-ranking officials of the company.

Among them is Can Gürkan, chief executive of the mining company Soma Kömür İşletmeleri and son of Alp Gürkan, the owner of the mine's umbrella corporation. Twenty-nine lower-ranking employees of the company also face prison terms of up to 15 years on charges of involuntary manslaughter. The indictment also noted that public officials found at fault according to an initial report by experts were being investigated. Public officials likely refer to inspectors for work safety who were accused of ignoring the safety violations by critics. An investigation has found that safety violations at the mine, such as an insufficient number of carbon monoxide detectors, lack of quality oxygen masks and wood ceilings instead of metal ones, contributed to the high death toll.

The catastrophic incident brought mine safety into the spotlight, forcing the government to launch an action plan to tackle the issue of workplace safety that has plagued the mining and construction sectors and led to a high rate of fatalities.

Speaking about the court's decision to reject the indictment, Manisa Bar Association President Zeynel Balkız hailed the ruling "will pave the way for a fair trial." Balkız noted that suspects faced different charges but the indictment lacked clear evidence pointing to each charge. "The indictment should have had clear evidence on what charges the suspects face and why they should be charged with that crime," he said. He said that as the Manisa Bar Association, they were pleased with the rejection of the indictment. "We want a fair trial both for defendants and for victims and we will closely follow the developments to ensure an in-depth investigation into those responsible for negligence or other charges without failing to comply with legal procedures and gathering sufficient evidence," Balkız said. He stated that the prosecutor's office plainly categorized the charges "in a wholesale fashion." Implying that public officials' involvement in alleged negligence should be investigated, Balkız said, "everyone with connection [to the incident] should be held accountable."

Balkız said the new indictment will likely be concluded by late December or later. "There was clearly a crime committed in Soma. The problem is finding the culprits and to what extent they should be held accountable," he said.