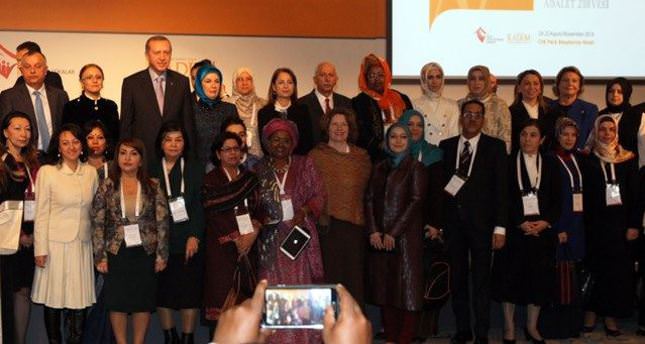 by daily sabah
Nov 26, 2014 12:00 am
Speakers at the First International Women and Justice Summit in Istanbul underscored the need for the redefinition of equality between men and women with more emphasis on justice instead of putting both genders on the same level.

The first edition of two-day International Women and Justice Summit, which was held in Istanbul, concluded yesterday with a series of conferences on women's rights. Turkish and foreign speakers at the event highlighted that gender equality should be redefined by a new dialectic: By bringing justice to the forefront instead of attempting to impose outright equality for both genders.

Sponsored by Daily Sabah, the event was organized by the Women and Democracy Association (KADEM) and hosted sessions on challenges women face regarding participating in politics and the decision-making mechanisms, gender-based pay in professional life, exploitation of women by the media, violence against women and other topics.

On women's inclusion in politics, Professor Serpil Çakır from Istanbul University, a researcher on women's problems, said that despite the pledge for affirmative action on the matter by all political parties in Turkey, the inclusion was still limited. Professor Margot Badran from Georgetown University noted that equality did not mean "sameness" and called upon for the redefinition of equality as the equivalence of conditions for women and men. Professor Beğlü Dikeçligil from Turkey's Erciyes University said feminism offered "an empty interpretation devoid of a concrete response to the equality concept."

Associate Professor Alim Yılmaz pointed to the existence of a paradox between justice and equality and said that what both notions lack was a humanity problem rather than a problem peculiar to women. Journalist and author Nazife Şişman said that the debate should focus on delivering justice equally instead of equality. "Justice is greater than equality since it also includes the equality," she said. Journalist Nihal Bengisu Karaca pointed to the media's role on the matter and said the media dismisses justice for both genders. She noted that age remained a barrier for women working in the media, as employment opportunities decreased once a woman aged.

Writer Cihan Aktaş criticized the "liberation" of women. "Different groups claim liberation of women. It is not liberation if others claim they freed you," Aktaş said.

On the media's role in regard to women's image, journalist Belkıs Kılıçkaya said the media should shun publishing photos of women subjected to violence, implying it further incited violence. "They should rather publish photos of those inhumane men," she said. Kılıçkaya also criticized magazines for "promoting a single image for women: Young and beautiful."

Associate Professor Huriye Martı, an adviser for Turkey's Presidency of Religious Affairs, said that groups against domestic violence in Turkey mostly sought "to eliminate cultural codes they view as the source of violence," adding that it was "an Orientalist point of view."

The summit organizers say that although women's rights and democracy have made great progress, the idea of "equality" failed to bring justice to men and women, as gender-based discrimination against women still prevalent. The organizers seek to promote "gender justice" while preserving cultural differences and values that are often brushed off or criticized by advocates of gender equality.