Ağca: Pope not worth shooting 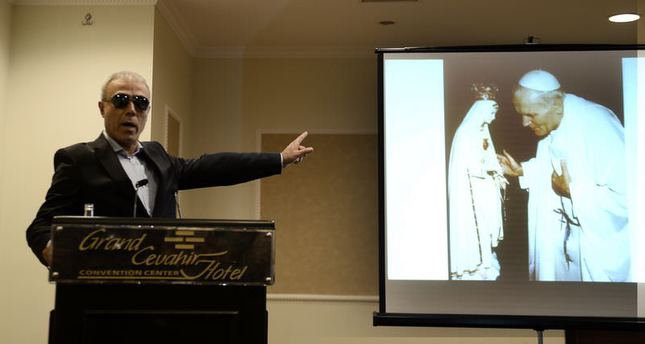 by Daily Sabah with Agencies
Nov 27, 2014 12:00 am
Speaking at a press conference yesterday, Mehmet Ali Ağca, would-be assassin of Pope John Paul II, said that Pope Francis, who will visit Turkey on Friday, was not "worth shooting." Ağca, who was released after serving time for shooting the late pope, said the new pontiff should not fear him. "He is a nothing to me. A bullet costs TL 10 ($4.50). The Pope's life is not worth TL 5 to me," he said.


The Argentine pope will be the fourth pontiff to visit Turkey after Pope Benedict XVI in 2006, Pope John Paul II in 1979 and Pope Paul VI in 1967.

Ağca shot John Paul II four times on May 13th 1981, as the Polish pope was riding in an open car through St Peter's Square in the Vatican. The pontiff was wounded in the abdomen, left hand and right arm but survived.

Ağca - who served 19 years in an Italian prison for the assassination attempt - was pardoned by John Paul II in 2000. He was later extradited to his home country to serve a 10-year sentence for other crimes, including the murder of prominent Turkish journalist Abdi İpekçi.