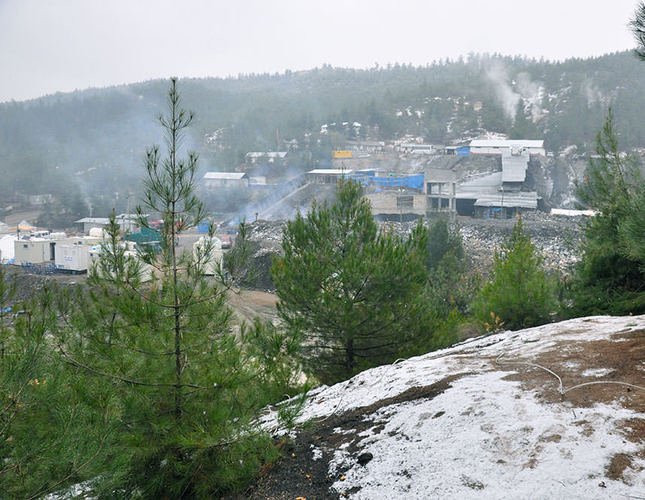 Ermenek, a mining town in central Turkey where 12 miners were killed in a recent disaster, seeks a way to boost its local economy to diversify employment options from dangerous mining and prevent migration to other cities

Ermenek, a town in the central Turkish province of Karaman, has been in the spotlight since October's coal mining disaster that left 12 miners dead. Residents of the town, whose economy is largely dependent on the mining sector, are looking to escape from the dilemma of working in the potentially hazardous sector or migrating to big cities for better employment opportunities.

Residents of villages near Ermenek, in particular, often turn to mining in the absence of job options. Those who cannot find jobs in mines located near the villages, migrate to central Ermenek. Yet, employment opportunities are also limited in the town, forcing locals to leave in pursuit of a better life. Locals complain that the mining sector in Ermenek is already on the brink of collapse, as coal mines suspended production in the wake of the disaster.

Looking to break the vicious cycle, locals in this town of 42,000 are appealing to authorities to both diversify the economy and improve the state of the mining sector. They call for tighter regulations to improve work safety in the mines and the introduction of incentives for other sectors such as agriculture, livestock breeding and tourism.

Ali Bardak, head of the town's Chamber of Tradesmen and Craftsmen, said mining is the only major source of income for residents and about 80 percent of the population in the town and nearby villages is dependent on it, with a minority making a living off growing fruit and breeding livestock. Referring to reports regarding the cancellation of licenses for mines over work safety concerns, Bardak said, "This is not what we want. We want the mines to be reopened." Bardak emphasized that instead of closing down the mines violating work safety, the state should increase inspections and bring the mining sector into compliance with international standards on that matter. "The lack of inspections is one of the factors [that led to October's mining disaster]. Ermenek hosts nine mining companies. Assigning permanent inspectors to those companies and requiring random, frequent and meticulous inspections are essential. This may help revive the mining economy," Bardak said. Although they offer a viable income, mines remain some of the most dangerous places for Turkish workers, according to government statistics. More than 3,000 people have died and more than 100,000 have been injured in mining accidents since 1941 in Turkey, according to figures from the Turkish Statistics Institute (TurkStat).

Bardak noted the need for introducing alternative economic resources in the town as well. "More sectors are needed here so that people will not be solely dependent on mining," he said, adding that even opening a university or just a single faculty would help growth in the local economy. He also pointed out the cultural significance of the town as the host of the tomb of Karamanoğlu Mehmet Bey, the 13th century head of a Turkish principality credited with the preservation of the Turkish language. "A faculty of Turkish language and literature and even the establishment of a military base here in Ermenek would contribute to the local economy," Bardak asserted, and said that Ermenek, with its natural beauties and a new reservoir lake – the second largest in Turkey – might also be improved to attract tourism investments to the town.

Ali Boztoprak, a city councilman for Karaman, said the geographical location of Ermenek hinders growth in the economy and already existing sectors such as agriculture and tourism should be boosted through incentives and new projects instead of diversifying the economy. Boztoprak pointed to the blow that the shutdown of mines would deal to Ermenek's economy and claimed that at least 10 villages would experience mass migration if the mines closed.

The town will benefit from government incentives for farmers for sustainable agriculture through funding of irrigation and other methods to improve agricultural activities. Food and Agriculture Minister Mehdi Eker said earlier this month that although farmers in Ermenek had no drop in their income, the growth in population and the nature of agriculture as a sector active only in certain seasons pushed people to turn to mining.