Company sacks over 2,000 in mining town 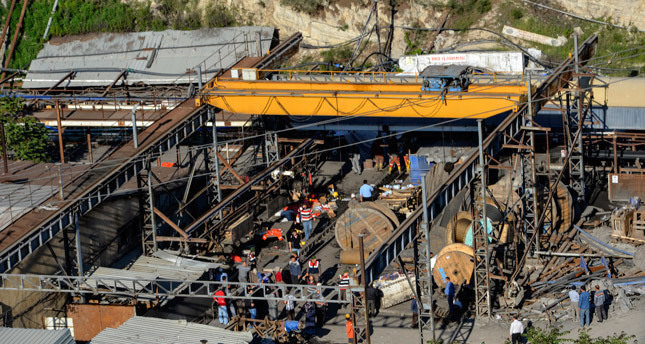 by Daily Sabah Dec 01, 2014 12:00 am
Soma Kömür İşletmeleri, the company that runs the mine in the western Turkish town of Soma where 301 miners were killed in an accident in May, announced yesterday that they have terminated the contract of 2,850 miners working in two coal mines.

In a written statement, company officials pointed out that their Eynez mine where the deadly disaster occurred, as well as two other mines were closed down after the incident in May, and properties of its umbrella corporation Soma Holding were seized. Officials said they continued paying salaries to miners even though the mines have not operated since May and their agreement to supply coal to a state-run mining authority had ended. "Soma Kömür İşletmeleri cannot afford to pay salaries anymore and is not legally bound to continue its contracts with workers. Therefore, their contracts are terminated as of November 30," the statement said.

Nurettin Akçul, head of the mining union whose members were among those fired by the company, said it was "a social disaster." Akçul called upon the government to take urgent measures on behalf of the sacked workers. He suggested that the state-run Turkish Coal Enterprises (TKI) to which the mines had a contract to sell coal, take over the mines. "The TKI may reopen the mines after maintaining full work safety and employ the dismissed workers as it already serves as the ultimate employer of miners due to its contracts with the mining companies," he said.

The company had closed its three mines in Soma after the May disaster, but one of them was reopened after inspectors gave the green light to its operation following an inspection into allegations of work safety negligence. According to official reports, negligence caused the disaster in Eynez mine. Soma Kömür İşletmeleri chief executive and senior officials were detained after the incident and face prison terms on charges of involuntary manslaughter. An investigation has found safety violations at the mine, such as an insufficient number of carbon monoxide detectors, lack of quality oxygen masks and wooden ceilings instead of metal ones. These violations reportedly contributed to the high death toll after a fire in the mine that led to the carbon monoxide poisoning of workers.