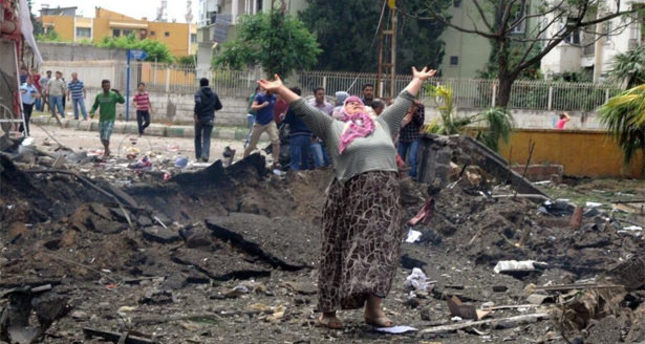 by Mehmet Ali Berber Dec 01, 2014 12:00 am
The Prime Ministry's Board of Inspection has found the Turkish National Police at fault in two bombings on a Turkish town near the Syrian border in 2013.

Wrapping up an inquiry into the two bombings last year that killed 53 people in Reyhanlı, a town in the southern Turkish province of Hatay, inspectors assigned by the Prime Ministry blamed a lack of coordination between police and intelligence services for "preventable" attacks.

The report concluded that although intelligence was available concerning the plans for the attacks, inadequate coordination between the police and the National Intelligence Organization (MİT) and conflict between the two agencies hindered efforts to stop the attacks. It further claimed that details of the plot were found out one day before, but one of the car bombs seen in police security cameras and parked near a police station "could not be located."

The Board of Inspection requested an investigation of local senior police officials "downplaying the intelligence regarding the bombing plot by treating it as a smuggling case." The board also called for an inquiry of the prosecutor's office for "failing to launch a probe on the plot despite tip-offs."

The board's report said two vans appeared on the Mobil Electronic System Integration (MOBESE), a network of police security cameras installed in cities and towns, but police officers failed to detect them although they knew their license plates. The report also claimed police focused on searching for the vans on roads between provinces rather than in town centers. It also said that one of the vans briefly parked near a police station in Hatay and was seen in footage by security cameras in the police station.