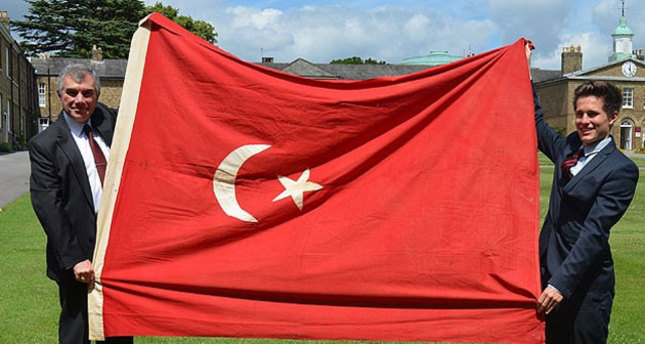 by Daily Sabah Dec 02, 2014 12:00 am
Necdet Özel, the chief of the General Staff, thanked a British family for returning an Ottoman flag captured in World War I to Turkey and invited them to attend the events in the country to mark the 100th anniversary of the Gallipoli campaign.

Jack Turner, 17, grandson of Staff Sergeant Edgar Turner, had returned the historical flag to Turkish authorities last summer, some 96 years after the elder Turner was entrusted with the flag by his commander, General Edmund Allenby, whose forces captured Damascus from Ottoman troops.

Turkey's military attaché in London handed Özel's letter and invitation to Matthew Turner, father of Jack, at a ceremony. Matthew Turner conveyed his family's thanks to Özel and said the letter was very precious and meaningful for the Turner family. He said they were looking forward to attending the 100th anniversary events of the Gallipoli battles in the Turkish province of Çanakkale.

The centenary of the Gallipoli campaign by Allied forces including British, French, Commonwealth and Irish troops, will be commemorated in Turkey on April 24-25, 2015. Descendants of soldiers from those countries fallen in the epic battle - which ended with a defeat of the Allies by Ottoman forces - senior officials from the United Kingdom and other countries will attend the commemoration events. Although the campaign failed, the Allied forces continued their drive to capture the Ottoman territories.