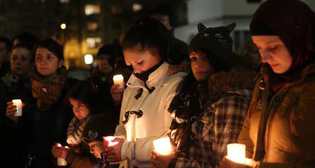 An online petition was launched seeking to grant a bravery award to Tuğçe Albayrak, the German-Turkish student killed after confronting men harassing two women, while German media debates whether or not her death would lead to public aversion to confronting violence toward others

ISTANBUL — Tuğçe Albayrak, 23, was attacked by an 18-year-old teenager in the parking lot of a restaurant in Germany's Offenbach on Nov. 15. Minutes before the attack, she confronted the teenager and his friends who were harassing two German girls at the restaurant. She died last Friday after lapsing into a coma following the attack.

The young German-Turkish student's death led to an outpouring of tributes for Albayrak who was lauded for standing against the assailants in an act of courage and integrity. A petition was launched calling on the German presidency to award a posthumous medal to her. The online petition has gathered over 132,000 signatures in the short time while German President Joachim Gauck has said that he would consider honoring Albayrak.

The young woman's death also sparked a debate in Germany regarding acts of courage. An article in the Frankfurter Allgemeine said that Albayrak's death may cause people not to attempt to intervene when they witness harassment. A columnist in Allgemeine Zeitung Mainz wrote that "people should not play the hero" and questioned whether it was necessary to endanger oneself while not remaining indifferent to such harassment. A columnist for Welt said the German public should be ashamed of not helping a woman who confronted a violent teenager and called for harsher sentences for perpetrators of such crimes. Columns in other media outlets echoed those sentiments and point to the dilemma of confronting harassment of others or not to avoid being attacked.

A Serbian teenager identified as Sanel M. was detained in connection with the young woman's death and is accused of manslaughter. A surveillance video released yesterday by German media outlets show the suspect attacking Albayrak. In the video taken by a security camera overlooking at the scene, assailants are seen approaching the young woman and arguing with her. Onlookers attempt to prevent assailants but one of them reaches out to the woman and violently pushes her. Albayrak then falls to the ground. She was gravely injured when she struck her head on the ground during the attack, and the assailants fled after the young woman fell down. Albayrak died after her family decided to take her off life support on her birthday when doctors had pronounced her brain dead. An autopsy was scheduled for yesterday to determine the exact cause of her death while the police urged witnesses to come forward. The two German teenagers Albayrak rescued from harassment also remain missing and the police appealed to them to testify. Albayrak will be buried in her hometown of Bad Soden-Salmünster after a funeral on Wednesday; the family has decided to donate her organs.

The German-Turkish girl's death was mourned with candlelight vigils across the country with people making tributes and hailing her as a hero. German media reported that Gauck was considering to granting a posthumous national order of merit in recognition of Albayrak's courage. Gauck wrote a letter of condolence to the young woman's family and said, "Tuğçe showed exemplary bravery and civil courage and came to the aid of a victim of violence where other people looked the other way."

Yesterday, a silent march was held in Munich for the victim. Turks and Germans marched together carrying banners in Turkish and German with messages of gratitude for Tuğçe. The march ended in front of the headquarters of a company operating the restaurant where Albayrak was killed. The restaurant staff and patrons were criticized earlier for not calling the police while the assailants harassed other customers before confronting with the slain victim. The protest's organizer, Levent Ekiz, told reporters that the restaurant chain should immediately draft a plan for its staff and teach them how to respond in such cases.

Alois Meier, head of a foundation established in memory of Dominik Brunner, also attended the march. Two teenagers beat Dominik Brunner, a German businessman, to death in Munich when he confronted the duo attempting to rob four school children. "Tuğçe and Brunner died because they did not ignore what happened around them. We feel sadness and a great respect for them," Meier said.