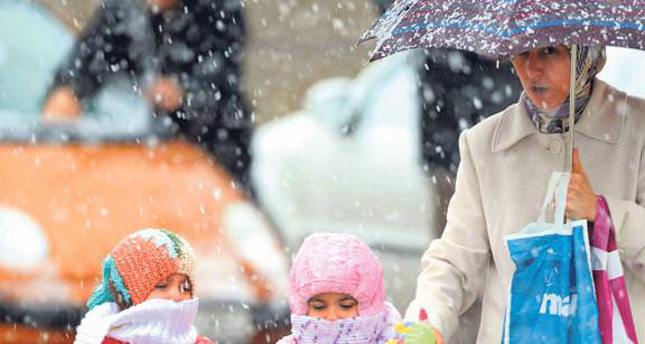 by Daily Sabah Dec 02, 2014 12:00 am
Weather forecasts for this week predict a cold front with rainfall and snowfall hitting areas across Turkey from Monday to Saturday.

Temperatures will drop as low as minus 4 C in the eastern regions while the western regions are not expected to see temperatures fall below zero, although frequent rainfall will bear down on big cities including Istanbul, İzmir and the capital Ankara up until Friday. Rainfall and snowfall will recede on Saturday with occassionally sunny weather on that day and a minor rise in temperatures. On Tuesday, all regions, with the exception of central and eastern Turkey, will be battered by rainfall. Partly cloudy weather was forecast for parts of central and southern Turkey. Eastern provinces will be either exposed to rainfall or snowfall on that day. The cloudy weather in southern Turkey should end on Wednesday with Antalya being the sole exception, with occasional rainfall expected in the province. The temperature in Antalya is expected to be as high as 19 C.

Thursday will see sunny weather making a comeback in the eastern regions while temperatures will still remain low, with the easternmost province of Van expected to be around 6 C.

Sunny weather will dominate western, central and southern Turkey on Friday although northwestern cities including Istanbul will be subject to rainfall with 11 C forecast for Istanbul on Friday. Rain and snow will also grip eastern and southeastern regions, with the exception of Diyarbakır and Şanlıurfa, which will see temperatures rising to 11 C and 16 C respectively.

The country's Black Sea region in the north, which is most exposed to rainfall due to its climate, will see sunny weather only on Thursday and Saturday, especially in its eastern part including Trabzon, Rize and Samsun.