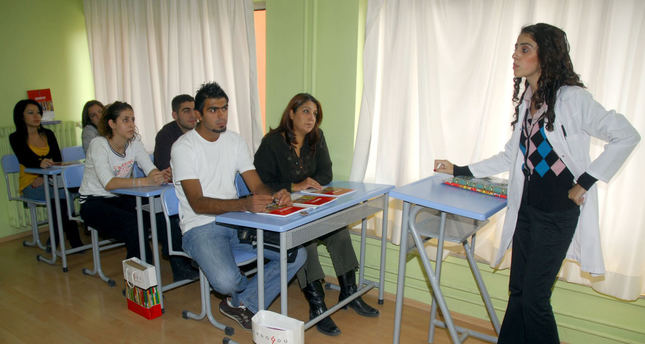 by Daily Sabah Dec 03, 2014 12:00 am
Addressing the Council of National Education yesterday, Turkish President Recep Tayyip Erdoğan pledged to continue the fight against "traitors using prep schools to finance their treason," in reference to the Gülen Movement. The movement, which is accused of attempting to carry out a coup against the government via infiltrators in the police and judiciary, was criticized by Erdoğan during the inauguration of the event's 19th annual edition in the southern city of Antalya.

Slamming the "parallel structure," the president said they undermined the country for the sake of prep schools. "These were the places where they earned money to fund their network of treason, where they trained recruits for those treasonous gangs," he said. Erdoğan vowed to continue fighting against "this network exploiting the poor people of Anatolia," noting that the prep schools would "no longer be on Turkey's agenda in 2015."

The president said that during his tenure as prime minister, the government came under fire "just because it sought to end a problem plaguing education in Turkey." "We wanted to take a major step in favor of students, teachers and parents, and treasonous gangs confronted us," he said.
Erdoğan said Turkey's education was being held hostage by a network of prep schools. "Their curriculum determined how university entrance exams would be held," Erdoğan said. Referring to the prep school system as "a cruelty," Erdoğan said that the "parallel structure" launched a coup attempt and a defamation campaign when his government sought to end their "dirty scheme." "We did not bow down to them and did not step back in the face of their exploitation of poor people in Turkey," Erdoğan said. He hailed the recent introduction of free prep classes by the Ministry of National Education that is viewed as a more comprehensive replacement for the paid prep schools. "We are determined to continue our struggle against this gang," Erdoğan said.

Prep schools, tasked to prepare students for the nationwide university entrance examination, emerged in the 1970s as a result of a problematic educational system, and then turned into a lucrative source of income for organizations running educational institutions across the country, particularly the Gülen Movement. The breaking point between the movement and the government came in November 2013 after the Turkish government moved to shut down prep schools. The government's move caused an uproar within the Gülen Movement, which has gained both funding and a steady stream of recruits through its prep schools. The movement runs a global network of educational institutions and a local network of prep schools and private schools operating under different names.

The president also outlined the AK Party government's education reforms in his speech, referring to the lifting of the headscarf ban for students and ban on Kurdish language education. "We faced strong resistance while doing these. A mindset prevalent in Turkey opposed us, which viewed students as members of the society that can be shaped for their own ideology. Thanks to the nation's support, we overcame this challenge and achieved freedom of education," he said.

Erdoğan said education should be a tool to acquire knowledge rather than something necessary to pass the exams for higher learning. He noted that an education system alienating the youth from his or her language, history, culture and civilization, "has serious problems." "Many young people know who Albert Einstein is, but most of them do not know who İbni Sina (Avicenna) is," Erdoğan complained. "They know the names of foreign pop stars by heart but unfortunately, they are ashamed of their own artists such as Dede Efendi, Itri and Neşet Ertaş," Erdoğan said, referring to prominent names of Turkish folk and classical music. "Of course, I can't accuse them. They are victims of an education system," he said. He underlined that educators should help students to achieve self-confidence and remove any inferiority complex regarding their own culture.

"I believe this council will help build an education system that will raise a generation who will be admired rather than admiring others," he said.
Noting education was key to ending hate crimes and racism, Erdoğan said education would also make democracy and national will a way of life.