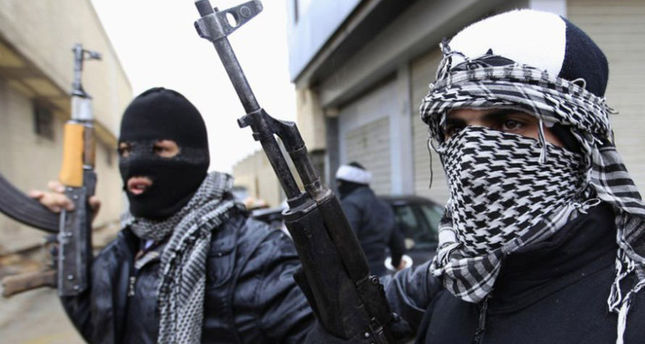 by Daily Sabah Dec 04, 2014 12:00 am
Abd al-Baset Azzouz, the alleged leader of al-Qaida in Libya accused of involvement in the 2012 murder of the U.S. Ambassador to Libya Christopher Stevens, was captured in Turkey, according to media reports.

A Turkish daily reported that Azzouz, an al-Qaida operative who allegedly headed the terrorist organization's Libya branch, and was involved in the murder of the U.S. Ambassador to Libya Christopher Stevens in a raid on the embassy in 2012, was arrested two weeks ago and extradited to the U.S.

The Milliyet daily said that acting on intelligence supplied by the Central Intelligence Agency (CIA), Turkey's National Intelligence Directorate (MİT) and the Turkish National Police located Azzouz in Yalova, a city some 180 kilometers south of Istanbul. Azzouz, 48, had arrived in Istanbul first, and then traveled to Yalova, a summer resort known for its thermal springs popular among Arab tourists. As the suspect left the safe house where he was hiding to go for a walk on Nov.13, a team of special forces detained him. A fake passport in the name of Libyan citizen Awad Abdalla S. Ahmida was found in possession of Azzouz. He was charged with illegally entering Turkey with a fake passport. The police also confiscated two laptop computers found in the safe house.

The Libyan national was transferred to a detention center for illegal immigrants in nearby Kocaeli province, and deported to Jordan on Nov.24. The Milliyet daily reported that Azzouz was handed over to U.S. officials in Jordan the day he arrived and was transferred to the United States for trial. An official at the U.S. embassy in Ankara said they had no information about the capture of Azzouz.

Azzouz was wanted for allegedly masterminding the deadly raid on the embassy. He was detained in Manchester in 2006, where he had been living since 1994. After a nine-month detention, he was released on bail and left the United Kingdom for Libya in 2009. He was reportedly appointed as al-Qaida leader in Libya by the terrorist organization's senior leader Ayman al-Zawahiri in 2011 after meeting him in Pakistan.

The suspect, also known as Abdulbasit Azuz, was designated a "global terrorist" in September by the U.S. State Department. The department said in a notice that Azzouz "committed or poses a significant risk of committing, acts of terrorism that threaten the security of U.S. nationals or the national security, foreign policy, or economy of the United States." British media outlets have reported that he oversaw hundreds of al-Qaida recruits at a training camp in eastern Libya. Eastern Libya is a nexus of training grounds for the Islamic State of Iraq and al-Sham (ISIS), which splintered from al-Qaida, according to David Rodriguez, head of U.S. Africa Command.

Azzouz's capture comes one year after a successful operation by Turkish security forces that apprehended former al-Qaida leader Osama Bin Laden's son-in-law. Sulaiman Abu Ghaith, who acted as a spokesman for the terrorist organization, was captured in the Turkish capital of Ankara before his deportation to Jordan and subsequent extradition to the United States where he was sentenced to life by a New York court.

It also came on the heels of an official acknowledgement earlier this week that two members of the terrorist organization PKK, designated as a terrorist organization by Turkey and the United States, were released by U.S. authorities. U.S. Homeland Security Secretary Jeh Johnson has stated that the two suspects fled to Canada after their release by an immigration judge.

Turkey, constantly criticized for helping terrorist organizations branding themselves as "Muslims," is known for its staunch crackdown on al-Qaida and close alliance with the United States, which makes it a potential target for the terrorist organization. Although the emergence of the Islamic State of Iraq and al-Sham (ISIS) overshadowed its notoriety, al-Qaida is regarded as a serious security threat in Turkey. The group was accused of carrying out the deadly 2003 bombings that targeted synagogues, the British consulate and a bank, though it did not openly claim responsibility. Since then, security forces have launched a string of operations against the group and dealt a blow to its affiliates across the country in nationwide operations which netted dozens of al-Qaida supporters.