Turkey to set up new camp for Syrian Kurds 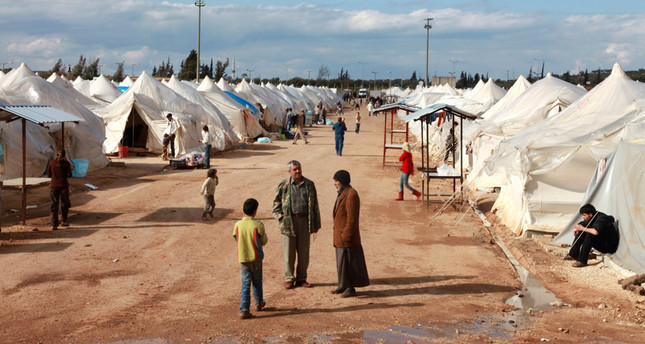 by AA Dec 09, 2014 12:00 am
Turkish authorities announced that a new tent camp for displaced Syrian Kurds who took shelter in the southeastern Turkish province of Şanlıurfa will be completed by January.

The camp, originally planned to house 20,000 people, is expanded to a capacity of 32,000 and the construction work is underway in Şanlıurfa's Suruç, where nearly 200,000 Syrian Kurds from Kobani fled into.

Şanlıurfa Governor İzzettin Küçük said Turkey set an example in helping the oppressed people fleeing their countries and Şanlıurfa would contribute to these efforts. Küçük noted that number of Syrians in Şanlıurfa approached 500,000 with the recent influx of Kurds from Kobani who fled the violent attacks by Islamic State of Iraq and al-Sham (ISIS) in the town located opposite Suruç about three months ago.

The governor said both locals and local administration raced to help the Kobani residents and the new camp would provide a better accommodation for Syrians. "The camp is designed to provide protection against winter conditions. It will also have facilities ranging from clinics to schools, to gyms and a cinema," Küçük stated.

Şanlıurfa, in three tent camps and a "container city," hosts 79,665 displaced Syrians according to figures provided by Disaster and Emergency Management Authority (AFAD) which oversees the accommodation of Syrians in those camps and delivery of humanitarian aid. AFAD, Turkish Red Crescent Society and local nongovernmental organizations mobilized efforts to help Syrians bracing for a harsh winter. Yet, the large number of displaced Syrians pose a challenge and those that are unable to rent houses will likely have to spend the winter in tents they set up in parks.