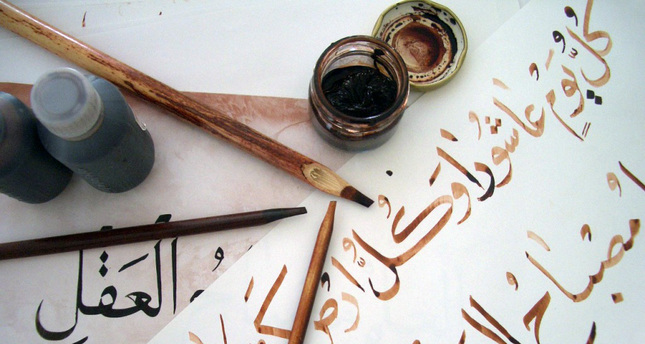 Ears straining, brows furrowed in concentration, the 20 Istanbul students listen closely to their teacher as they struggle to learn a foreign tongue which will open new opportunities. But this is not English or Germa - it is Arabic.

Arabic is one of the world's most widespread languages, spoken by more than 422 million people, most of whom live in the Middle East and North Africa, according to the United Nations.

Interest in the language has boomed recently around the world, but especially in Turkey, which is geographically close to the Arab world and currently hosts around two million Syrian people who have fled the war in their country.

The reason for this increasing interest in Turkey varies:


"After the 9/11 attacks and the Europe [financial] crisis, Arab tourists, who were earlier going to the U.S. and Europe have turned their attention to Turkey, which is a Muslim country," says Ibrahim Helalsah, assistant professor at the foreign languages department of 29 Mayis University in Istanbul.

Turkey's economic development and its active foreign policy over the last 10 years are among the other reasons, according to academics.


"For example, some credit agencies raised credit ratings of the country to investment grade. After these kinds of developments, Arab countries started to make investments in Turkey," Helalsah says.

Foreign investment in Turkey was $14.6 billion between 1984 and 2002; the figure is now $145 billion in total since 2003, according to Turkish Prime Minister Ahmet Davutoglu.

"We were passive earlier over the problems in Middle East or in neighbors. Over the last ten years, this has totally changed," says Muhammed Agirakca, general manager of AkdemiStanbul.

The Arab Spring which erupted in late 2010, as well as the current Syria and Iraq crises, have also increased the need for the language both in Turkey and globally.

"The Arab world is at the center of energy and conflicts. Even negative incidents like wars have pushed people to learn that region's culture and language," says Hasan Deger, 43, an Arabic-language teacher at Istanbul municipality's ISMEK course.


"Almost all the media organs in the world cover stories from war-torn countries in the Middle East. To be able to do that, they need employees speaking Arabic," he adds.

He gives an example of Turkish diplomats who were kidnapped in Mosul, Iraq on June 11, to explain this need better. Forty-six Turkish nationals, including diplomats, consular officials and their families, plus three Iraqis, were freed and returned to Turkey on September 20.

The institute manager also talks about a wrong perception about the language in Turkey. "When people are asked about the meaning of Arabic here in Turkey, the first thing that comes to minds of many people, is religion."

"The biggest aim of many of those, who learn Arabic is to try to understand the holy Quran, the Prophet Muhammad's sayings and Islamic culture and civilization," he adds, "but the language is not only about this."

"It is also a culture, an art and a language of literature. It is also necessary for tourism, health and security.

The students are also aware of increasing value of Arabic.

"I think Arabic has overtaken English," says 20-year-old Meral Gozitok, a first-year student at the Arabic Literature Department of the Dutch-based Islamic University of Europe.

"I prefer Arabic to even Turkish because it is a richer language compared to other languages and much more advantageous from now on than any others in terms of finding a job here in Turkey," Gozitok says, who adds that he wants to do business with Arabs after graduating.

Seyma Delioglu, 20, a student from the same university has a different reason to learn. "My aim is to understand the holy Quran in the best way and to be able to translate former scholars' books," she says.

"I may open a publishing house or work as a translator."

Tarik Ablak, 21, a student at Faculty of Theology of 29 Mayis University, says, "Almost everyone speaks English here in Turkey from now on. It is not a very important feature for a person in terms of finding a job. But if you speak Arabic, plus English, it will open many doors to you as it becomes one of the most wanted languages."

Not just students, but people from different professions are looking for ways to learn the language when they can find time.

Ilyas Sungu, 27,who has been a tourist guide for three years, is one of them.

"I actually studied public administration at Anadolu University. At that time, my sisters were working in the tourism sector. I realized that there is an increasing need for employees who speak Arabic. Then, I went to Jordan and learned Arabic in a short period of time and took a certificate to become a tourist guide for Arabs."

"We have students from every profession, including medical workers, journalists, teachers and those in tourism," Arabic teacher Deger says. "Middle-aged people were interested in Arabic earlier; now demand from young people has increased recently."

As Turkey re-engages with its Ottoman past - the current president is supporting the study of Ottoman Turkish, a language written with the Arabic alphabet - it is clear that learning patterns in Turkey are changing.