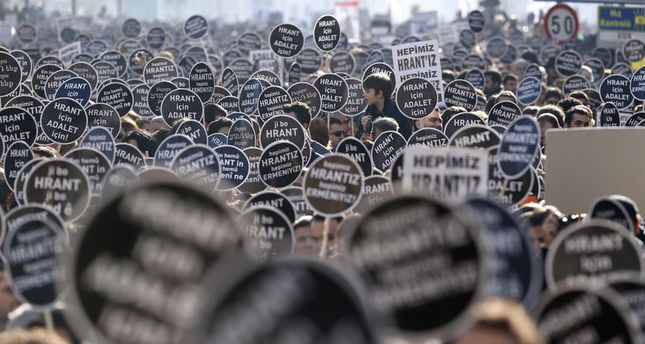 by Daily Sabah with Agencies Dec 15, 2014 12:00 am
A former chief of Istanbul police was summoned by a prosecutor yesterday for interrogation over the 2007 murder of Armenian journalist Hrant Dink. Though not detained, he is being treated as a "suspect" for possible negligence.

Celalettin Cerrah, who was head of the Turkish National Police's Istanbul department at the time of Armenian journalist Hrant Dink's murder in 2007, was summoned by a prosecutor for interrogation yesterday as part of a probe into alleged police inaction prior to the murder.

The former police chief left the prosecutor's office after about two hours of interrogation, and did not answer the questions of reporters awaiting him outside the courthouse.

He is among the Istanbul authorities who held posts at the time of the murder, and who were questioned by prosecutor Yusuf Hakkı Doğan. Last week, Doğan interrogated Ahmet İlhan Güler, former head of Istanbul police's intelligence department, and Ergun Güngör, who served as deputy governor. The prosecutor will question six other officials over possible "negligence" in relation to the murder. The officials are accused of not providing protection for Dink despite intelligence reports that the journalist would be murdered.

Charges against Cerrah and other officials were dismissed by another prosecutor earlier, but an Istanbul court ruled on June 6 that officials should be questioned. The negligence case was merged with the case of murder for which a 17-year-old teenager was convicted. This means that the prosecutor's office will now expand the investigation into deliberate negligence on the part of police and other relevant officials. Dink's family has long claimed that the prominent journalist was victim of a plot by police intelligence officials, but that their connection to the murder was covered up.

The prosecutor's office previously questioned top police intelligence officials including Sabri Uzun, Ramazan Akyürek and Ali Fuat Yılmazer. The trio are officially referred as "suspects" in the prosecutor's case. Yusuf Hakkı Doğan has summoned Ogün Samast, a convicted murderer, as witness in the case earlier this month. Samast claimed in his testimony that Ramazan Akyürek, former director of Turkish National Police's intelligence department and Ali Fuat Yılmazer, deputy director of Istanbul's police intelligence department were aware of the murder plot. Samast claimed Yasin Hayal, who masterminded the plot, told him before the murder that Akyürek and Yılmazer would "support" them.

An investigation by previous prosecutors who worked on the murder case revealed that they dismissed allegations about Akyürek and Yılmazer. Sabri Uzun, who was head of the National Police Intelligence Department, had claimed his subordinates concealed tip-offs warning against the murder of Dink. Questioned about the murder, Uzun said Yılmazer hid an intelligence report from him regarding a plot to kill Dink.

Yılmazer is currently in prison for a separate case involving illegal wiretapping, while Akyürek was removed from duty amid a major reshuffle in Turkish law enforcement last year. Earlier, he was suspended over allegations of destroying and leaking secret documents regarding the Dink investigation. Testifying to prosecutors recently, Akyürek admitted that he was aware of a planned murder regarding Dink, after one of his subordinates presented him with an intelligence report. He told prosecutors he did not remember the details, and thought that the Istanbul and Trabzon police directorate had "taken necessary measures."

Dink's murder by a youth describing himself as a nationalist motivated by Dink's "insults" against Turkishness, raised concerns about the return of the so-called "deep state," a circle of state officials, mafia, police and intelligence who were accused of orchestrating the murders of a number of journalists in the past. Indeed, reports in media outlets claim both Akyürek and Yılmazer are affiliated with a "parallel state," the name used to describe infiltrators of the controversial Gülen Movement in the police and judiciary. The movement, headed by U.S.-based cleric Fethullah Gülen, is accused of attempting to overthrow the government and imprison its critics by launching operations by prosecutors and police loyal to them through fabricated and planted evidence implicating defendants in a number of cases.