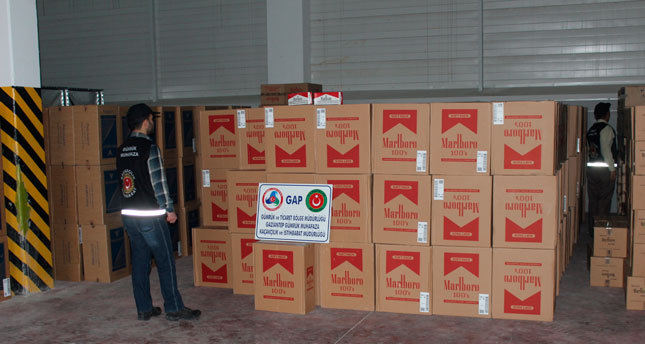 Police confiscated 62,000 cartons of bootlegged cigarettes estimated to be worth TL 6 million in an operation in southern Turkey

Turkish security forces have seized 62.000 cartons of bootlegged cigarettes worth about TL 6 million ($2.61 million) in an operation against smugglers in southern Turkey's Gaziantep.

The cigarettes, which were declared as exports to Iraq from another country, were loaded on a truck from a customs warehouse in Mersin in southern Turkey. They were destined for an airport shop in Irbil, Iraq. Customs officials installed a vehicle-tracking device on the truck as a precaution against smuggling. But the truck's driver removed the device on the way.

Upon losing the device's signal, Turkish security forces launched an operation to locate the truck. The truck's driver was captured while loading the cartons onto another truck in the province of Gaziantep. Five people were detained after the truck driver told police he received bootlegged cigarettes from a private warehouse in Mersin. The suspects are accused of fraud for attempting to sell the cigarettes in the domestic market instead of exporting the goods to avoid levies.

Another new case of fraud in the transit trade involved a recent operation against suspects smuggling red meat into Turkey by pretending to export them to third countries. Mersin, a Mediterranean commercial and a main entry and exit point for imports and exports, was again at the center of the smuggling operation. Over 1,000 tons of smuggled meat was discovered in raids of warehouses in Mersin.

Turkey is fighting against a thriving bootleg cigarette market. Despite security forces' daily operations to seize thousands of boxes of cigarettes, supply and demand for these cheaper cigarettes remain steady.

Cigarettes made in Bulgaria are the most commonly smuggled into Turkey. Bootlegged cigarettes from China and the United Arab Emirates are also among the most trafficked.

According to police reports, cigarettes from Bulgaria and other eastern European countries are smuggled into Turkey via Iraq, Syria and other countries in the Middle East, often through eastern ports on the Mediterranean Sea. Turkey is coordinating efforts with neighboring countries against international smuggling.

An increase in the smuggled cigarette rates is attributed to a low tax for tobacco products in countries in the region, increased cigarette import taxes in Turkey and lower sentences for cigarette smugglers compared to those of other commodities.

The Turkish police's organized crime units seized 99.1 million packs of cigarettes in 2012 alone, according to the most recent statistics. This figure was 69.7 million packs in 2011. Bootlegged cigarettes cause about TL 3.3 billion in lost taxes for the country.