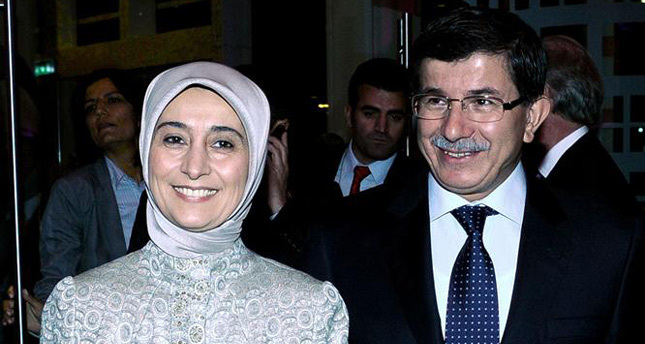 by Daily Sabah Dec 17, 2014 12:00 am
Prime Minister Ahmet Davutoğlu's wife, Sare Davutoğlu, called upon countries to develop policies to help women who are pursuing careers while also maintaining a family life in her address to the fifth annual International Businesswomen Forum in Doha yesterday,

The two-day forum brings together participants from more than 40 countries, including women leaders in business and other professions, government officials, financiers, economists and representatives of non-governmental organizations, and opened with a keynote speech by Davutoğlu.

In her speech, Davutoğlu praised the contribution of the annual event to the discussion of women's role in business, and spoke about the challenges women face in the business community as well as the changing role of women in society.

Davutoğlu emphasized that women, who also play a significant role in Islam, became role models over time as social norms and culture changed. She highlighted the success of businesswomen during the rise of Islam in present-day Saudi Arabia and in the Ottoman territories, giving examples such as Prophet Muhammad's first wife Khadija, "a reputable merchant," women executives in Medina's marketplace during the caliphate of Umar and businesswomen who were active in the Ottoman textile sector.

She said that education must be promoted among girls in order to better women's social inclusion, and underscored that women should not be forced to make choices to advance their career. "Women are the foundation of the family and society. So, they should not be forced to choose work over family or vice versa. Work life should not be considered as more valuable than family life," Davutoğlu said.

"If the cost of having more women in the labor force is increasing psychological problems and crime among children due to lack of love, guidance and security, when they really need their mothers, increasing rates of dysfunctional children due to unhealthy prenatal and postnatal conditions of the mother or increasing rates of divorce due to lack of tolerance and communication between partners, the government should step in and implement social policies to support women in both business and family life," Davutoğlu added.

She urged governments to promote the economic empowerment of women by removing legal and regulatory barriers to women's participation in enterprise. "The policies should focus on taxation systems, influencing public perception of female entrepreneurs, improving women's control over economic resources, strengthening women's economic security, encouraging women's participation in decision-making, and removing psychological factors such as the lack of self-confidence and the fear of success,"Davutoğlu said.

The International Businesswomen's Forum aims to provide an international platform for the exchange of ideas among women from around the world, as well as create a network between them, both for business cooperation and to discuss ways to overcome challenges they face.