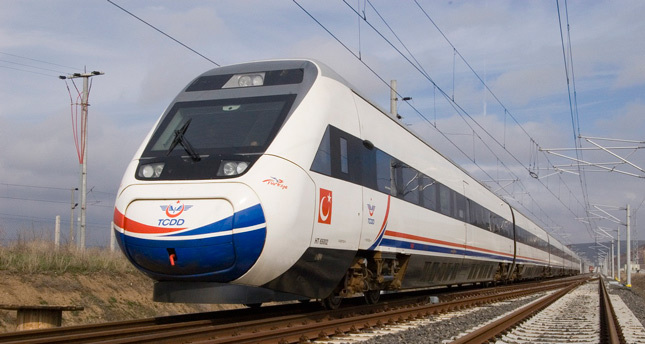 Turkish leaders inaugurated a high-speed train service between the cities of Konya and Istanbul yesterday, the next stage in Turkey’s expanding network of high-speed rail lines

The new line decreases travel time between the two cities to slightly above four hours, from 13 hours by a conventional train, and about 10 hours by bus.

Speaking at the inauguration ceremony, President Erdoğan said this marked "a reunion" between the two cities. "We connect Konya, the ancient capital of the Seljuks with Istanbul, ancient capital of the Ottoman Empire today, after having Ankara and Istanbul connected in July," he said. Erdoğan stated that the travel time between two cities will be reduced to below four hours soon.

Prime Minister Ahmet Davutoğlu said at the ceremony that the AK Party governments have completed the construction of 1.895 kilometers of railroads since 2002, pointing out that Turkey did not build any new railroads in the four decades prior to 2002. He stated that the current and planned high-speed train and conventional train railroads will connect Asia and Europe with their connection to the Baku-Tbilisi-Kars railroad which runs between Georgia, Azerbaijan and Turkey, and the Marmaray train line beneath the Bosphorus. "We are determined to make our country a central hub of transportation and logistics routes," he said.

The train line will have four scheduled trips daily, two from Istanbul and two from Konya, at 7:10 a.m., 6:30 p.m. and 6:10 a.m. and 6:35 p.m. respectively. It will pass through Eskişehir to the north-west of Konya, Bozüyük district of Bilecik province, Arifiye in Sakarya province and the city of İzmit, before reaching the station in Pendik on Istanbul's Asian side. Tickets will be on sale at prices starting from TL 42.5 (approximately $18), and will offer economy and business classes. President Erdoğan announced at the ceremony that tickets will be free for the first week.

The line is the latest stage of Turkey's ambitious high-speed train project. The Ankara-Istanbul high-speed rail line was launched last summer, five years after the first high-speed train service was introduced between Ankara and the western province of Eskişehir. It was followed by another line between Eskişehir and Konya. Minister of Transportation Lütfi Elvan announced that a new express train line will be launched in 2019 between Ankara and Istanbul. It will reduce the current travel time via high-speed train from 3 hours and 45 minutes to 1 hour and 10 minutes. Elvan also said yesterday that the four-hour travel time between Konya and Istanbul will be reduced below four hours with introduction of new sets of high-speed trains in January that reach speeds of up to 300 kilometers per hour.

High-speed rail projects will not be confined to central and western Turkey. The lines connecting Sivas in central Turkey and the eastern province of Erzincan, and those which will connect Konya to Gaziantep in the southeast through Mersin, Adana and Osmaniye are also planned. All in all, 17 provinces where almost half of Turkey's 76 million residents live will be connected by high-speed trains.

Through high-speed trains, the government hopes to boost economic, social and cultural activities, and change travel habits. Officials estimate an $824 million (TL 1.75 trillion) contribution to the economy annually from high-speed train services through the reduction of energy costs, carbon dioxide emissions, costs related to traffic accidents and other factors.

The country invested TL 7.5 billion for the expansion and improvement of railroads in 2014, and plans to increase it to TL 8.5 billion next year. It also plans to launch the first domestically-produced high-speed train in 2018.