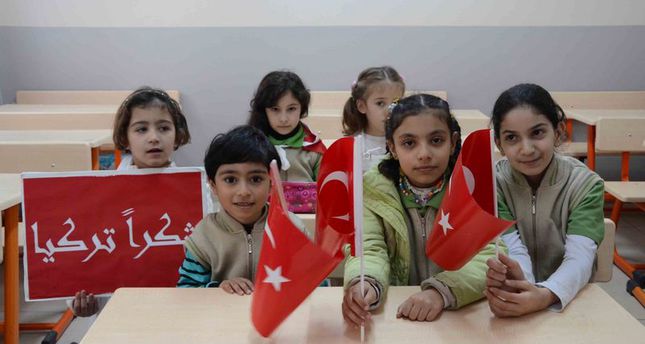 by AA Dec 19, 2014 12:00 am
A new school for Syrian children opened its doors in Istanbul on Thursday, giving hope to hundreds of children who took refuge in Turkey from a civil war that has left their country in shambles.

Kademoon, meaning "We are Coming" in Arabic, is located in Esenyurt district on the European continent, where around 50,000 Syrians live, according to the municipality.

The one-story building has 18 classrooms and can accommodate up to 1,200 students. Currently, there are 850 registered students and 40 teachers. Kademoon will function as an elementary, middle and high school, making it the 15th Syrian school to open in Istanbul.

Both students and teachers at Kademoon were happy to return to the educational system.

"My goal is to become an engineer and reconstruct my country," said 13-year-old Mohammed Saar, who has been living with his mother and five siblings for the past year in Istanbul. His father was killed in Homs.

"I feel very lucky to be in Turkey and I am glad to be here in this school," said 17-year-old Leys Allaf. "I pray for those who helped open this school for us."

"What I want now is to graduate as soon as possible and go to college here in Turkey," Allaf, who would like to be an architect, added.

"The curriculum is the same as in Syria," said Suher Abbas, Kademoon's administrative manager. "The only difference is Turkish classes."

"It is definitely difficult sometimes to teach students who have experienced war and lost family members," she added. "Even with all the bad things that happened in our country, we are glad to be able to provide them with education here."

"We are very happy to have a proper school here and to continue teaching," Diyab said. "I thank you very much."

Turkey has welcomed Syrians since the beginning of the civil war in March 2011, hosting around two million under temporary protection regulations, which provide for an unlimited stay, access to public medical healthcare and protection against forcible return.