Deputy PM Kurtulmuş: No end to ISIS without no-fly zone 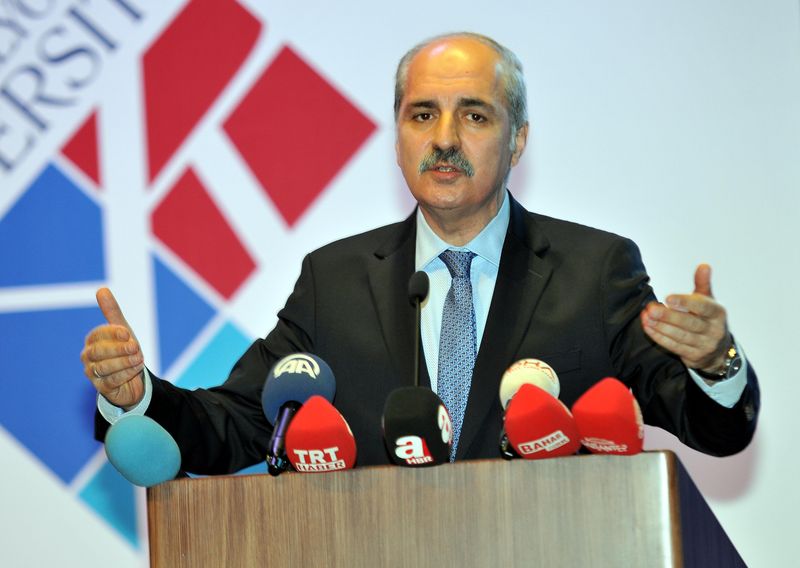 Deputy Prime Minister Numan Kurtulmuş, at an event on the Middle East, said that a no-fly zone is essential to gain an upper hand against the Bashar Assad regime in Syria and the presence of the Islamic State of Iraq and al-Sham (ISIS) in the country will continue if the international community fails to remove the Assad regime.

In his opening remarks, Kurtulmuş said the Middle East was at the center of global peace and the lack of peace in the region would deprive the world of peace. "We couldn't solve the crisis in Syria and there is far from an immediate solution," he said. Kurtulmuş noted that the current structure of the U.N. was not appropriate for resolving the conflict in Syria or any other conflict. "We live in a world where those wielding power in the U.N. Security Council have final say on such matters," Kurtulmuş said, echoing President Recep Tayyip Erdoğan's bitter sentiment over the structure and functionality of the U.N. Security Council, summed up in Erdoğan's motto: "The world is bigger than five."

"We think that restructuring international bodies is essential to achieving global peace," Kurtulmuş said, adding: "The world cannot be left in the hands of five big countries."

He said Turkey became a source of inspiration with its political and economic stability despite turmoil around the world and in its region. "This is because we accomplished the democratic processes despite military coups," he claimed. Kurtulmuş said Turkey's reconciliation process will be an example for divided countries in the region, referring to a series of steps to end the country's decades-old Kurdish question.

Kurtulmuş also touched on the Arab Spring and said two main factors that led to the Arab Spring were hatred of regimes entangled in injustice, corruption and oppression and the aggression of Israel pursuing an expansionist policy.

He said that the absence of rich oil resources in Syria, unlike Iraq, hindered intervention in that country by foreign powers. He said the imposition of a no-fly zone, long advocated by Ankara, would "corner the Syrian regime."

Kurtulmuş said that failure to improve the political circumstances in the region in the near future would help terrorist organizations flourish. "For some, it is about removing ISIS from Syria instead of putting an end to the Assad regime," Kurtulmuş said, referring to the international community's response to the Islamic State of Iraq and al-Sham (ISIS) in Syria. "For us, ISIS is not a cause but rather a consequence of political instabilities," he said. "If political circumstances remain the same, there will be another terrorist organization even if we finish off ISIS," Kurtulmuş said. "The solution is the inclusion of different groups in Syrian society to political processes. Assad leads a regime which slaughtered 300,000 people, destroyed cities and he would certainly will not step down just because we say so. We need to have this regime cornered. A no-fly zone is essential for this reason," he said. Kurtulmuş said in the absence of hope for peace, people have been deceived by ISIS. "People need hope. They need to know that peace will come, for instance, in a couple of months," he said.

President Recep Tayyip Erdoğan has made it clear that if Turkey's aid and support is demanded in the fight against ISIS, a safe zone and a no-fly zone should be established in Syria and the Syrian regime should be targeted along with ISIS, as he deems Assad to be the root of the turmoil in the area.

Addressing the delegates at the event, former NATO Secretary-General Anders Fogh Rasmussen focused on the situation in Turkey's neighbor Syria. Rasmussen urged a solution for the Syrian war similar to the "Bosnian model," which will enable different ethnic groups and faiths to govern and will persuade President Bashar Assad to step down.

Rasmussen praised Turkey's position in the region and said the country was a beacon of progress, hope and prosperity in a region fighting civil war, unrest and terrorism, noting Turkey's role as a safe haven for Syrians fleeing the war. However, he noted that Turkey's stability and success is under threat from the chaos in the region. He said ISIS is the most serious actor among the many biligerents in the Middle East. He said the group neither represented Islam nor a state, as its name implied, and called for further air strikes, which have been launched by a U.S.-led coalition, adding that stopping ISIS was key to eliminating the challenges the region faced. He also called for support to locals in the region fighting ISIS.

He noted the difficulty of resolving the Syrian conflict, pointing to the persistence of the regime and the divide in the opposition that may lead to infighting once the Assad regime collapses. Rasmussen said the "Bosnia-Herzegovina model" that will enable "a soft divide" may be applied in Syria. He acknowledged that it was not "a perfect solution as religious, ethnic and political rifts are deeper in Syria than the Balkans."

Kurtulmuş, on the other hand, said the Bosnia model would not succeed in the region, noting that dividing countries into cantons was one of the reasons for the mismanagement of those countries. "People of this region have a culture of coexistence," he said.

Rasmussen said supporting moderate members of the Syrian opposition was one of the ways to persuade Assad to step down, to get him to negotiate with the opposition.

The former NATO chief said the Middle Eastern nations needed an overall democratization process and Turkey can have a catalysing role to that extent, as it "champions reform." He said Turkey is a very important actor and should play a large role in resolving the Middle East's problems.

Kurtulmuş and Rasmussen then joined a debate session entitled "What's Happening in the Middle East?"

The event brings together scholars, politicians, activists and representatives of nongovernmental organizations from around the world. The organizers say the two-day event aims to discuss the root causes of the chaos in the Middle East and offers advice to policymakers and international organizations about the measures for the settlement of the conflicts plaguing the region.