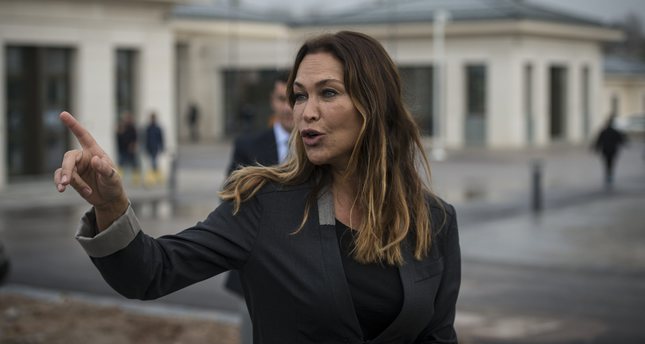 Prominent actress and singer Hülya Avşar has filed a lawsuit against opposition CHP Chairman Kılıçdaroğlu, in the latest chapter of their legal battle after he derided Avşar over her “pro-government” stance

Opposition Republican People's Party (CHP) Chairman Kemal Kılıçdaroğlu faces a lawsuit from one of his new adversaries – Hülya Avşar, a renowned television personality and prominent actress. Avşar filed for compensation from the head of the main opposition party over his "insult" accusing her of being a sycophant for the government.

This is Avşar's second lawsuit against Kılıçdaroğlu over what the celebrity calls "insulting" remarks. Avşar is seeking TL 100,000 ($43,000) in compensation from the opposition leader.

The actress's lawyer Eda Ergin filed the complaint in an Istanbul court over the December 15 remarks by the CHP leader. Speaking to reporters, Kılıçdaroğlu said Avşar was not "an artist," adding, "A sycophant cannot be an artist. An artist is someone standing strong against power," he said. The lawyer said in the complaint that her client was subject to repeated attacks from Kılıçdaroğlu against her personal rights after her initial lawsuit and "Avşar did not engage in a debate with Kılıçdaroğlu."

"Hülya Avşar does not have to have the same political views as Kılıçdaroğlu. Yet, he considers himself entitled to attack, insult and humiliate Avşar based on a ridiculous thought that brands someone a sycophant if he or she does not support the opposition," Ergin said in the complaint.

She said Avşar had freedom of expression within a legal limit and had no qualms of whether her remarks would be supportive of any political view. The complaint further claims that Kılıçdaroğlu's remarks, widely distributed in the local media and online, unfairly left Avşar confronted with a wrong perception in the public eye.

Avşar recently filed a lawsuit against Kılıçdaroğlu after the opposition leader, who has previously criticized Turkey's new Presidential Palace, said in a statement that President Recep Tayyip Erdoğan "may live in his new palace however he pleases. He may even have Hülya Avşar living next to him." Avşar claimed Kılıçdaroğlu humiliated her in public and is seeking TL 50,000 in damages.

Speaking to media outlets after Kılıçdaroğlu's remarks, Avşar said that the opposition leader had "a problem with freedom and democracy. … I thought he was a gentleman." Avşar said that she would ignore Kılıçdaroğlu's remarks and continue expressing her views: "I still respect him because I defend people's freedom of expression, but I doubt his stature. I knew he did not have leadership qualities, now I am not even sure whether he is a politician or not."

Avşar came under fire after she said the Presidential Palace, which the opposition heavily criticized, was "not as extravagant as claimed."