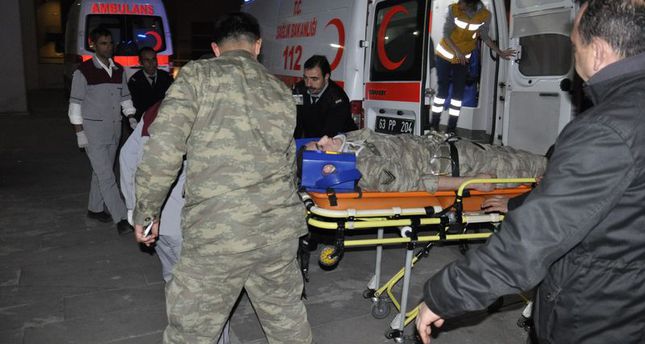 by Ahmet Topal Dec 22, 2014 12:00 am
Turkish military sources deny that suicides among soldiers are the result of alleged grievances and claim that they are mostly due to psychological problems of conscripts such as "bad news" from home.

Soldier suicides was on Turkey's agenda again after a soldier killed two colleagues while on a border patrol in Turkey's southeastern Şanlıurfa province before turning the gun to himself on December 8.

Military sources said suicides cannot be attributed to military life and they are usually the culmination of soldiers' personal problems. The suicidal soldier in Şanlıurfa recieved a phone call from his home town before his killing spree, reportedly from his girlfriend who was seeking to break-up with him.

Officials complain that the media coverage of suicides only adds to the woes of soldiers' families already concerned about their safety. They point out that "suspicious death" allegations in media outlets unfairly strain the public's confidence in the army. They claim the rate of suicides in the army do not deviate from the suicide rate patterns in general in the country.

A total of 3,189 people took their own lives in 2013, according to the statistics compiled by Turkish statistics authority Turkstat from data provided by the Turkish security forces. The crude suicide rate was 4.19, meaning every four people out of 100,000 people committed suicide. Military sources say the number of suicides are low when considering soldiers' easy access to weapons.

According to military officials, families of soldiers are vital to prevent suicides among soldiers and families need to be in regular contact with their sons, brothers, relatives under arms. To that extent, Turkish Armed Forces allow soldiers in the field to maintain contact with their families via satellite phones.

The army offers psychological support for the conscripts through 392 Guidance and Consultation Centers staffed with experts on treatment of psychological problems. Conscripts' mental state are monitored when he first signs up for compulsory military service and those exhibiting suicidal symptoms are followed up by medics in every unit and are hospitalized if needed. Military officials urge families of conscripts to contact his commanders first in the case of a domestic problem. The army also set up a hotline for families concerned about psychological state of soldiers.

In Turkey, every man over the age of 21 is obliged to complete his compulsory military service. Soldiers are assigned to military units all across the country after completing roughly one month of training. Troops come from all walks of life, and include former convicts, drug addicts and those with a troubled past. Though they undergo a psychological examination before being shipped to risky areas such as borders, critics say many individuals slip through the cracks, and are assigned loaded guns despite the risk of mental or psychological problems.

Nongovernmental organizations claim that death toll from suicides and accidents are higher than the official figures supplied by the military. They also claim that most deaths remain uninvestigated