Turkey set to be hit by heavy snowfall 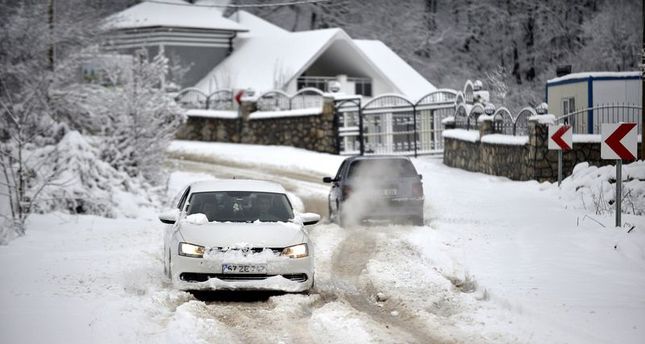 by Daily Sabah Dec 22, 2014 12:00 am
Weather temperatures are expected to drop in many cities across Turkey today, causing major snowfall, due to cold air temperatures travelling eastwards from the Balkans.

According to the statement released by Turkish State Meteorological Service, the temperatures are expected to drop by an average of 8 degrees Celsius starting on Monday morning.

The drop in temperatures are expected to cause heavy snowfall, mainly in Central and Eastern Anatolia.

The heavy snowfall is expected to cause major disruption in Bilecik city and the surrounding area, Sakarya, Kocaeli, Bursa, Eskişehir in Marmara region; Çankırı in the Central Anatolia region; Rize and Artvin in the Black Sea region; Bitlis, Şırnak, Mardin, Batman, and Siirt in the Southeastern Anatolia region.

The roads to Uludağ Mountain, one of the major winter sports destination, have been closed due to heavy snowfalls, causing many drivers to divert their routes and return back.

Weather experts have warned that drivers might experience delays and difficulties on the roads, due to heavy snowfall, and advised drivers to be cautious of slippery roads that could cause traffic accidents.
Last Update: Dec 23, 2014 11:45 am
RELATED TOPICS