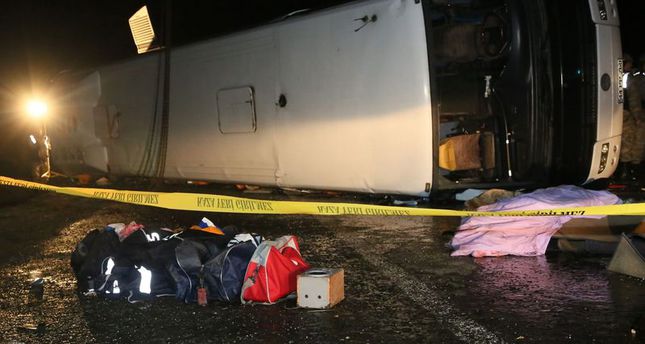 by AA Dec 23, 2014 12:00 am
A passenger bus rolled over after skidding on an icy road in the central province of Sivas, leaving one passenger dead and 49 others wounded, Turkish health officials said yesterday.

The bus, which was heading to the eastern province of Ağrı from Istanbul, continued to slide on its side until it stopped when it slammed into a water fountain on the side of the road, witnesses told Anadolu Agency.

Victims were transferred to local hospitals and at least four people remain in critical condition.
The driver suffered no injuries and was taken into custody by police.

An initial investigation reported that the front tires of the bus were not the right type for the winter season. Winter tires are a requirement for all heavy vehicles in Turkey, including trucks, tow trucks, tankers and buses.