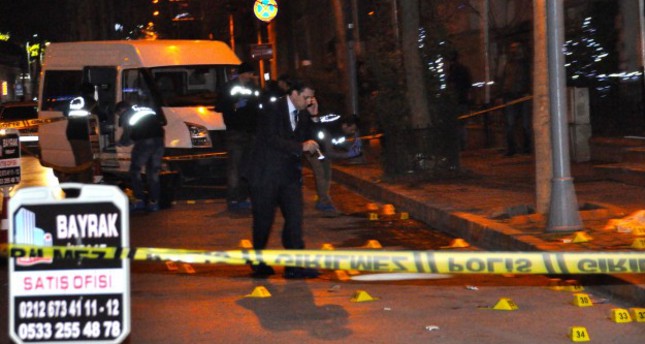 by Daily Sabah Dec 25, 2014 12:00 am
Istanbul's upscale neighborhood Nişantaşı, also known as being the center of luxury brands, witnessed a fierce assault late on Wednesday, in which the brother of a leader of a criminal gang, Vedat Şahin and his companion died after being shot by suspects who opened fire with Kalashnikovs from a car in motion.

The incident reportedly took place around 10: 00 pm on Wednesday when Şahin and his close friend were walking along the renowned Valikonağı Street, a famous spot for shopping in Nişantaşı. Walking only 20 meters after leaving Şahin's house located in the street, the duo were shot dead by suspects who opened fire from a car with Kalashnikovs. Seriously injured men died at the nearby private American Hospital where they were taken for treatment. Enver Aydın, who was passing by the scene of the incident was also shot in the assault and is currently receiving treatment at the hospital.

Police cordoned off the area and closed the street to traffic.

An investigation into the incident reportedly has been launched.