Inmates given careers for a better future 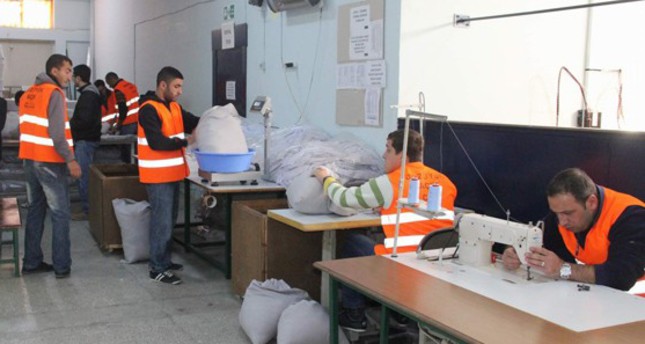 Turkish prisons have long been associated in the country’s collective memory with pain, tears, cruelty and death, but now they feature modern workshops and social facilities that help prisoners gain skills and professions

Following the 1980 military coup in particular, the wrongdoings toward inmates in the Mamak, Metris and Diyarbakır prisons will always be remembered with tears. Those who were imprisoned, guilty or not, had trouble readjusting to society or restarting with a clean slate once they left prison. However, Turkey's prisons have experienced a significant transition over the past 10 years. Now, prisons feature modern workshops that are almost equal to factories, along with rehabilitation, social and health facilities. New and more comfortable cells as well as newly built "private rooms" for inmates suggest a humane transition in Turkish prisons. Moreover, as part of the Supervised Release Act, thousands of detainees and convicts enjoy their freedom while they work in the fields and benefit society as well. We followed the changing incarceration conditions by interviewing detainees and convicts in the prisons.

There are 144,405 men, 5,382 women, 1,628 children and 2,456 foreign convicts and detainees spread across 366 prisons in Turkey. Most of the cells in the F-, L- and T-type prisons, which were built after the year 2000, are double-story cells. The ground floor features a living area with a bath, sink, table and chairs while the beds are on the second floor. Wardens and correction officers consider 2000 as the milestone year for prisons in Turkey. Pınarhisar Prison, Bursa E-Type Prison and Kütahya T-Type Prison also feature the oft discussed "private rooms" within their social complexes. Inmates who are observed to behave well are allowed conjugal visits once every three months. There are 22 workshops in the Bursa E-Type Prison and the textile workshop is the biggest one among them. Aside from three separate textile workshops, there is also a bakery with a daily production capacity of 2,000 bread loaves. The Turkish Naval Forces' training suits as well as 70,000 hats and 150,000 coats are manufactured every year in the textile workshops of the Bursa E-Type Prison, and all the coats and pants warn by correction officers throughout Turkey are also sewn in these workshops. They are so productive that the prison made more than $844.6 million in net profit last year.

There are many drug addicts in prison; thus, officials have introduced programs to help treat substance users during their time behind bars. Psychologist Mehmet Şahin of Kütahya E-Type Closed Prison notes that there has been an increase in the number of inmates who do not have self-control due to drug addiction or schizophrenia. According to the data of the General Directorate of Prisons and Detention Houses, there are 1,898 elderly inmates in Turkish prisons. Foreign national inmates face the most difficulties in prison, however. "The interrogations of these foreigners are handled with examiners who only speak Turkish. Moreover, most of the lawyers who are appointed by the bar to these foreigners are not able to communicate with the suspects. Authorities should appoint lawyers who know foreign languages," said the manager of the General Directorate of Prisons and Detention Houses, Zafer Kılıç.

Among 11 active courses offered at the prison in Kütahya, the most popular ones are Quran courses and painting courses followed by computer and web design courses. The inmates come together and organize literature days as well where they discuss books and poetry, and adult inmates educate 16 illiterate child convicts. Mahir Doğan, one of the course instructors, said he has been taking care of the problems of the convicted children for the past two years. "I am working hard to prepare the children for the outside world. Even a little change makes me happy and helps me to sleep well," he continued.

Kütahya Prison Warden Naci Yıldız, said they are working in accord with the Convention on the Rights of the Children. "We are trying to boost the morale of the children through workshops within the prison. We do not hold them in solitary confinement. We encourage them to continue their education. They are also able to watch four films every month. However, they are unhappy to be labeled as lost causes. We all have children; we do not engage in violence in prison. People should see that we are doing a good thing here for the society. The children want to paint on the 250-meter-long prison walls, but we do not have the budget to accommodate their wish. I hope that a businessman, musician or artist who hears our story can undertake our plan as a social responsibility project," Yıldız emphasized.

Convicted children in the Sincan Children Education House spend their day either in workshops or a garden. The education house is a shelter to 134 convicts under the age of 18. Each cell holds one child only and there is no refrigerator, washing machine or TV in the cells, but these are not what they miss the most. They long for their homes and families. The assistant manager of the Sincan Children Education House, Tuğba Yıldızbaş, emphasized that they are trying to create a cozy home atmosphere in the prison. "Until the children are convicted for their crimes, they are traumatized in the crowded prisons. In here, the importance of education stands out. There are children within our establishment who go to school or work. They do not have any money for the road. Most of the time, we can afford it but I do not know for how long we will be able to do this," Yıldızbaş said.

Most of the 5,382 women incarcerated in Turkish prisons are imprisoned for murder, robbery or drug-related crimes. Şenay Ertan, who was imprisoned in the Bursa E-Type Prison because of an honor killing, believes that the Supreme Court of Appeals will not recognize her criminal sentence of 14 years. "I am divorced and I have three children and a grandchild," Ertan said, adding that her psychological state is getting better since she was imprisoned. "When I get out, I will open a workshop. I am planning to employ women who serve time in prison as nobody employs convicted people. I will write, 'Convicted women can work here' on my workshop's door. This is my dream," Ertan expressed.