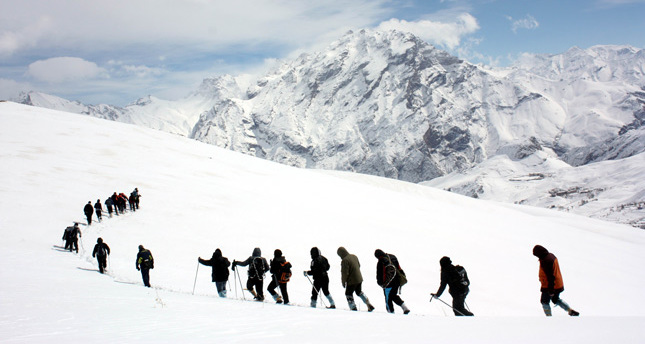 Turkey’s reconciliation process to resolve the lengthy conflict with the PKK and the country’s Kurdish question has benefited mountain climbers who are returning to the southeast, which was once plagued by terrorism, as a peaceful environment emerges

With the terror attacks and clashes between terrorists and security forces in the mountainous regions of southeastern Turkey ceasing thanks to the reconciliation process, which aims to end terrorism and restore the rights of the Kurdish community, mountain climbers have found the opportunity to scale the rugged terrain again.

The mountains around Hakkari, a southeastern province that has long been the scene of terror attacks and clashes, are now largely silent, save for chirping birds and the rustling of leaves in the wind. A ban on travel to the mountains due to the deteriorated security situation was lifted. Mountain climbers from Turkey and from around the world are now flocking to the province, which finally found relative peace after decades of a campaign of terror and a harsh crackdown on terrorists by security forces.

The Cilo Mountaineers' Club in Hakkari, named after Turkey's second highest mountain in the province, organizes expeditions to the 4,135-meter-high mountain and other smaller ones in the region. This year, 400 mountaineers visited the province and 24 climbs were organized. The club's director Hacı Tansu said climbing activities had boomed in Hakkari recently and they were exerting efforts to attract more climbers. "2014 has been a busy year in terms of climbing. For three decades mountain climbers shied away from visiting here as there was a ban. But we witnessed an important rise in interest in the region in the past two years," Tansu said.

Tansu was sentenced to three months in prison in 2010 for climbing Cilo Mountain on charges of trespassing in a military zone, two years before the reconciliation process began. A large section of the mountain was deemed unsafe at the time and declared a "temporary security zone" where access was banned.

In 2005, the government initiated a process of peace-building measures and later entered into the reconciliation process in 2012 during which the government announced a series of measures to restore the rights of the Kurdish community and rebuild the regional economy. The PKK responded favorably to the reconciliation process and announced the organization would lay down its arms and leave Turkish borders in 2013. The PKK's self-described withdrawal was ordered by its leader, Abdullah Öcalan. Since the withdrawal, no significant terror attacks have occurred in Turkey.

Since the launch of the process, predominantly Kurdish southeastern and eastern cities have enjoyed a return to peace after the PKK campaign of terror that began in 1984 and claimed more than 40,000 lives.